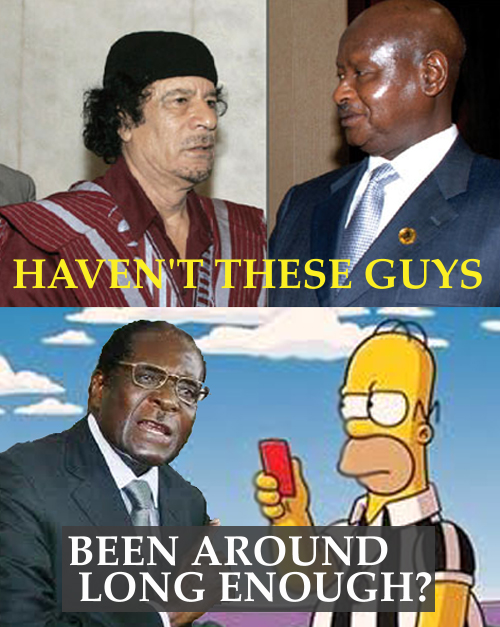 The reason twevolution won’t come to Uganda is because Ugandans are tired of conflict. But apathy is a heavy curse: beware another Zimbabwe.

Sunday Uganda’s official electoral commission declared Yoweri Museveni the presidential victor with more than 66% of the votes. Museveni starts his 6th 5-year term and while it’s clear there was enormous vote rigging, even a clean election would have brought him to power.

Billie Miller, spokesman for the Commonwealth countries monitoring the election had to resort to criticism of the runup to the election rather than the actual vote casting itself.

In an interim statement, Miller said that “the main concern regarding the campaign and indeed the overall character of the election was the lack of a level playing field.”

She was referring to the huge amount of money spent by Museveni – much of it from the American right, combined with what the observers felt were unfair practices by media and government officials inhibiting the opposition’s message.

All that may be. But the margin was too big for there to be any question as to the legitimacy of the election, if like we Americans you believe you can spend whatever you want however you get and say whatever you want no matter how untrue.

And to tell you the truth, I think it goes further than that. Most Ugandans were not born during the terrible years of Idi Amin, but his legacy lingers as a dark blotch on the country’s reputation. But most Ugandans did experience many years of war with the Lords Resistance Army, and along their border during the Sudan conflict.

They are tired of conflict. Museveni is seen as having brought peace and stability. And more recently, oil. Oil has been discovered and will be extracted by Chinese which are building Uganda’s infrastructure faster than an ant colony builds tunnels.

What worries me in the long term is this is exactly the prescription for disaster that turned beautiful Zimbabwe into the dark side. The long civil war, and then the war for so long just across the border in Mozambique, brought battle fatigue to the librarian in the city. When a seemingly nice guy with strong ideas came along, he was embraced.

With time, he relied more and more on the military. Which is exactly what Museveni is doing now. The military was exemplary if not brilliant in their ending the wars with the LRA, but now … they have nothing to do but beat protestors.

And with the American right’s finances behind him, Museveni is set for life.