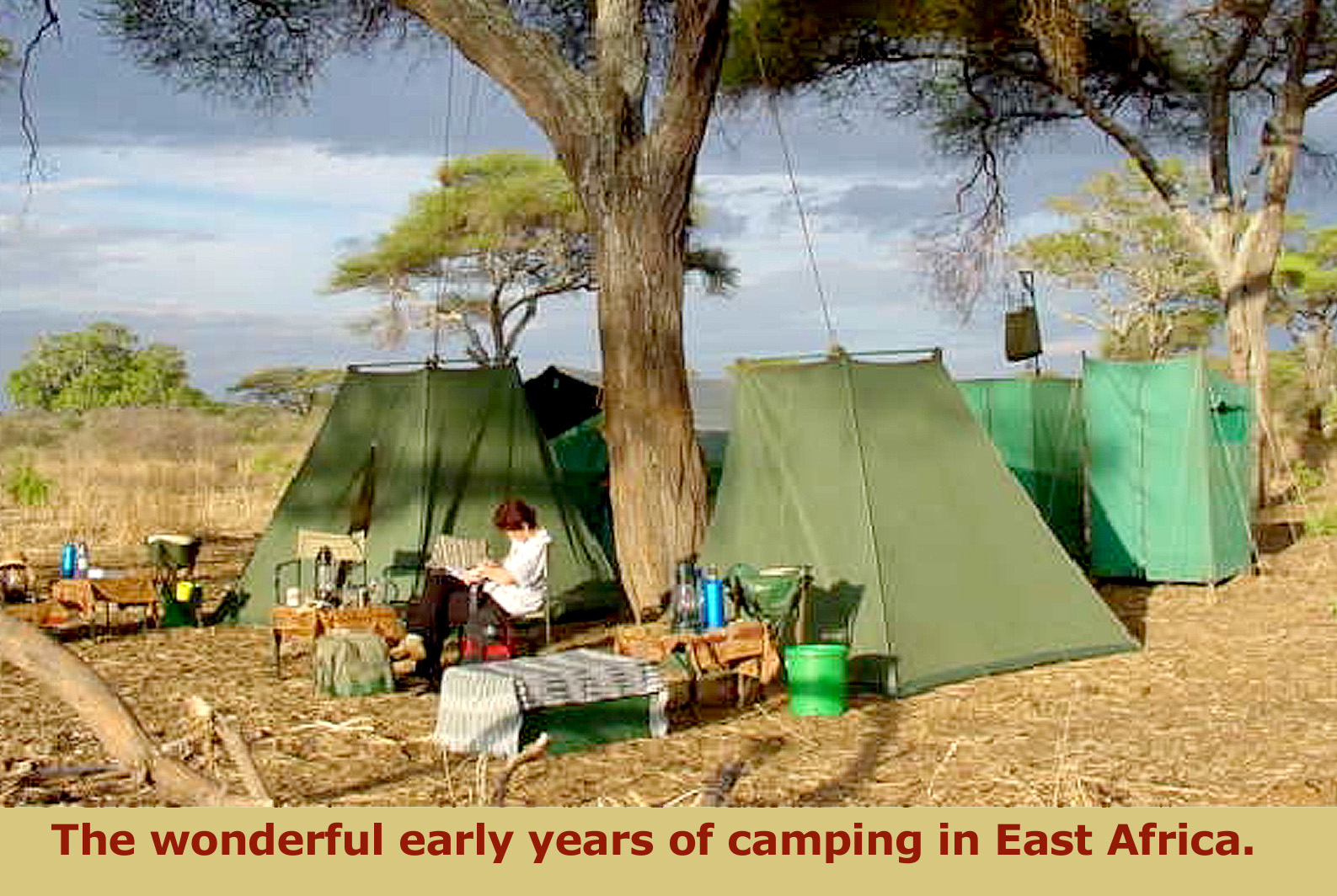 The ending of the recession and its accompanying surge in bookings are redefining the American safari travel market. One important change: luxury camping is OUT!

Yesterday I discussed how the market will evaluate permanent lodging, but it’s with some sadness that I conclude the era of camping might be over in East Africa.

And it might not be, altogether. What I know is falling in interest as fast as a baboon plummeting out of his tree at sunrise is so-called “luxury camping.”

In the old days when we first started comfortable mobile tented camping, we took the whole camp and staff with us along the itinerary. It took the guys at least a day to break camp, move and reset it, and on that moving day we’d go to a lodge.

That was the camping I really enjoyed. These were large tents, spring beds with comfortable 2- or 3″ foam mattresses with a bit of linen to make them look good, detached long-drop (toilet) tents and detached (hot-bucket) shower tents. There was then a mess tent, and it usually took a staff of at least 8-10 to work a small camp, and the staff/client ratio was about 1:1. 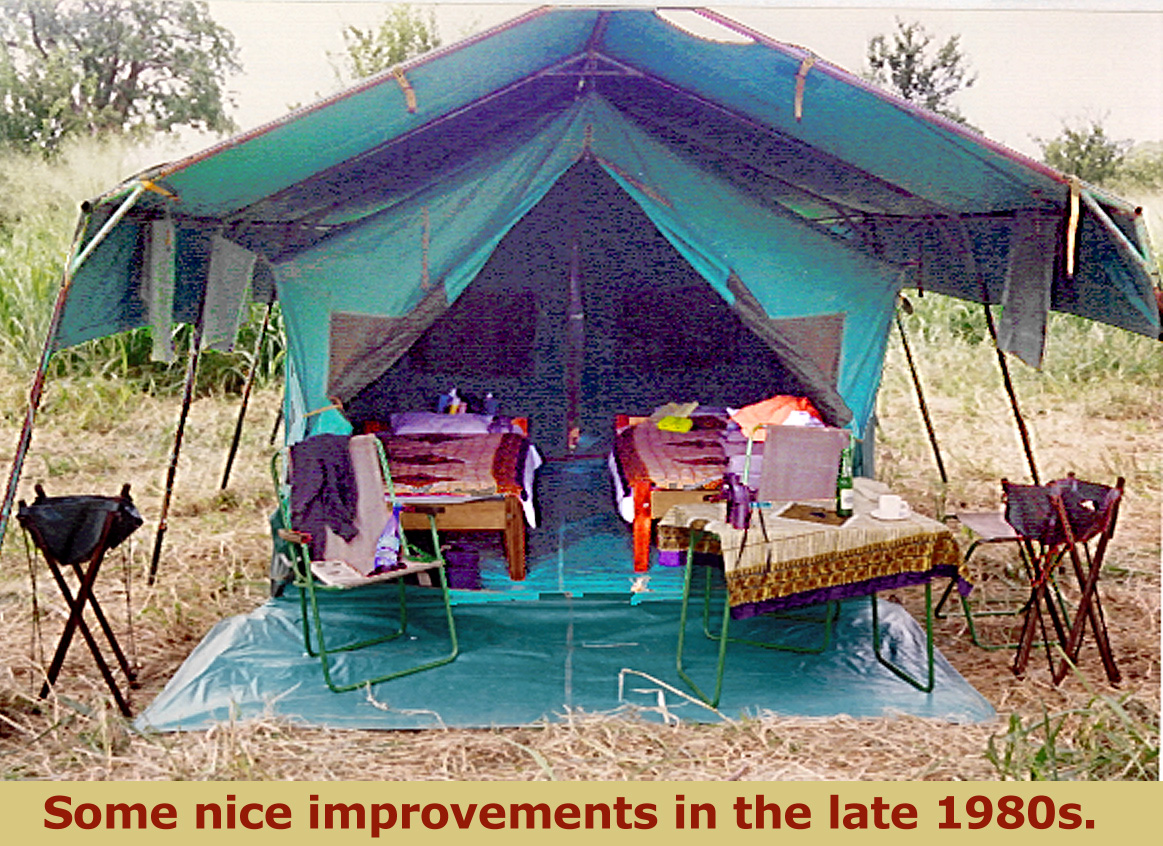 The reason for these camps in the first place was because there wasn’t an alternative! One of my favorite places to camp was Naabi Hill in the Serengeti with its sweeping views of the migration plains. The nearest lodge was at Ndutu, 30k away.

We loved it so much, we ultimately destroyed it. We oversold camping. We referred to the “real Africa” and experiencing the veld “like the first explorers.”

Right. Brochures are instruments of exaggeration, and in this case, inversely so. It’s TODAY that the camps are like the early explorers. Today, “camps” have clawfoot iron bathtubs and cellar wines served in Waterford crystal.

Here’s what happened and why the new American market now rejects camping.

The cost of camping was on a par with staying at a lodge in the early 1980s, right after the second major recession since I started my career redefined American market interests in East Africa. So price in the beginning wasn’t an issue. You had a choice: be a wimp and stay at a lodge, or be adventuresome like you expected you’d have to be when you first started thinking about going on safari!

And it was, truly, adventuresome. Gerbils would scurry under the plastic floor all night long like little tumblers rolling through the ground; scorpions had to be dumped out of your shoes in the morning; elephant would knock trees’ seeds onto your tent in the middle of the night, and hippo would be crunching grass right outside your matted window.

I remember a wonderful guy, Richard Lattis, then the curator of herpetology at the Bronx Zoo (later the director) waking me up rudely in the middle of the night as he lunged out of his spring bed onto mine (and me!) to watch the hippo on my side eating the grass just outside the tent.

I remember my son, Brad, insisting he was old enough to leave the mess tent at dinner in the dark (at about 7 years old) to go back alone to his tent to visit the long-drop. He came back remarkably quickly with a white face, stoically silent, and a disposition unable to use the long-drop for several days subsequently.

I found leopard tracks around his long-drop!

Or my great friend, Gregg Painter, expert birder, wandering to the edge of camp while the rest of us slept off the morning heat in our cots after our game drive, rescued in the nick of time by my driver, Winston, as he pulled his Landrover in between Gregg and the lioness with her cubs!

Those were the days. 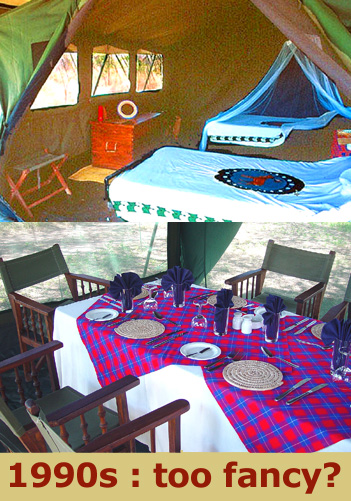 And it was particularly nice that the same staff, same tents, same outstanding food, traveled with you from place to place.

And it became more and more popular, because it should have been! So guess what, the price went up… on two fronts. First, the normal supply/demand curve pointed every price upwards, and second, the government began charging special fees for camping.

Then, as the price mounted parity was always in jeopardy. Those of us outfitting the camps started to scratch our noggins wondering, “What the hell are clients paying so much for, when down the street there’s a real bathroom?!” We were always worried that the price threshold wouldn’t hold.

And then in the mid 1990s, the competition got fierce. The main company in Nairobi that made canvas tents went bonkers. Canvas – most of it pulled up from South Africa – doubled in price from 1995 to 1999. That led to even higher pricing.

And by the early 2000s government fees for camping within a game park reached $100 per person per night.

And there were now more lodges and more permanent tented camps, but the market demand was still substantial. All inclinations to hold prices down disappeared.

By 2000 the net cost for a person camping including fees was just under $300 per night. That would translate into a retail market price of $500-700 per night. The mean retail price of a safari using a permanent lodge was around $350 and a permanent camp, around $400.

The disparity was now enormous. How’d that happen?

Market demand, I think. We were too good at promoting the “real Africa.” The fantasy of an African safari was most closely reflected in a camping program. We learned that many travelers were in search of this fantasy and like Space Mountain or Bourbon Street, we gave it to them!

The successful formula attracted lots of new investors. Suddenly the national parks were creating new “special campsites” all over the place. Sometimes, they were in sight of a lodge!

So to earn your customer’s business, “improvements” began. Like… flush toilets and solar lighting?

Flush toilets and solar lighting takes a while to set up. The idea of a moveable camp was gone. So was the idea that camp was set up just for your safari. The only way any of this made sense was to set up “camp” for 5-6 months in one place, so you could bury electrical cable, create either a complicated septic system or make arrangements to dispose of all waste regularly, hire staff for extended periods, and figure out a long-term supply strategy. 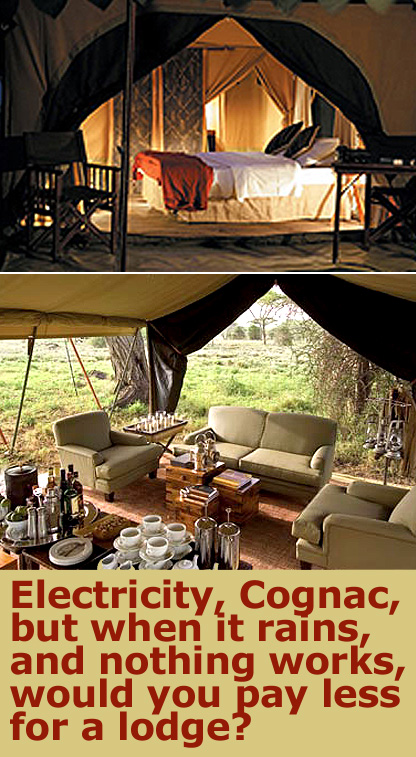 It was semi-permanent and unmovable. The giant tent interiors included four-poster beds with beautiful covers, arm chairs and armoires, separate attached chambers with flush toilets and big showers and a separate bathroom sink area. When you settled into your queen-sized bed at night under the draped mosquito netting, book lights could be switch on until you drifted off to sleep.

Pathways were demarcated with colored rocks and kerosene lanterns, flutes were played by appropriately dressed Maasai askaris and pork loin was served with Pinot Noir.

Animals wouldn’t dare come anywhere near the place, anymore, but that was OK.

Now, all of that isn’t so bad until…

No matter how “semi-permanent” it all was, it wasn’t a lodge or permanent camp, and nature ruled. It was one thing in the old days when it rained and got muddy in front of your tent. You just took off your shoes and let down the flaps. Didn’t matter if a few drops of water or mud followed you inside.

But good grief, imagine what mud does to a white fluff comforter!

In the old days, if we saw the path’s water rising, we’d quickly move the tent! Not possible with these new monstrosities. You just watched slowly as the water seeped onto your floor drenching the sheep mats. And my, what water can do to an electrical system!

When the toilet often didn’t flush right… or when the bed lights didn’t turn on .. Or when the shower spigot fell onto you… or when you found carpenter ants in your Sealy Posturpedic… the contrast between “camping” and “lodging” grew stark.

And you’re paying more for all of this than if you were in a nice, cozy lodge!

The days of camping – at least East Africa’s style of “luxury camping” – are ending with this current recession.

It remains to be seen if the old days of camping will make a come-back at a reasonable cost. It will be harder, because there are fewer places that don’t have permanent camps or lodges which justify a mobile camp.

And I wonder if the animals will ever again join humans trying to be as wild as them.

But whether the old days of camping return, the ridiculous days of “luxury camping” are over.