Skip to content
I’m so tired of the incessant charges some of my less appreciative readers make of my understanding of the facts that today I’ll tackle one of my most solid areas of understanding: men’s fashion. In Kenya and the U.S. On safari or off.

Over my many years as a guide, friends and family alike have remarked on one thing I always got right: how to dress for safari. (Admittedly I tend to keep things longer than perhaps I should. I have a blue sweater my mom knitted for me in 1984 that I wear constantly on safari.)

Fashion, particularly for safari, like a safari, is timeless. Safari fashion has not changed much over the years. It’s distinguished by one overriding characteristic reflecting the excitement and magic of safari traveling: it’s expensive.

But of course it must be useful, because a little slip here or there, one two few pockets on your vest, and poof, you’re dust! That’s the greater point: appropriateness costs more:

“Pack fashionable safari style clothing such as bikinis,” Safari Clothing Wear tells us, “because this may be the kind of weather they may probably find at any safari.” 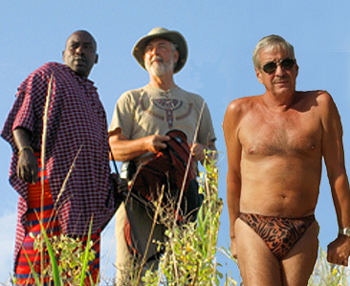 It was so clever of Herb to wear his bikini on that walk with Maasai that we did several years ago. Herb’s confidence in his attire allowed him to actually lead the walk. He strut out ahead of Elai, the Maasai guide, qho was particularly envious, because his shuka was too loose and risked constantly falling off.

Ricky’s two-piece attracted more animals than we normally see in the Aberdares, and everyone was grateful for that! 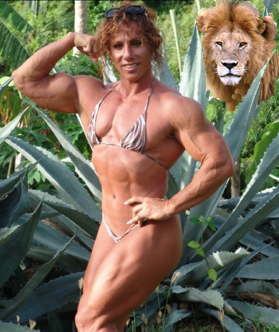 What’s particularly interesting is that safari style clothing is directed more often to men than to women, and in my opinion, it’s about time. It was back in the 1990s when “being a dork” was about the most horrendous opprobrium anyone dare give you. That was when I decided that I should begin studying safari attire.

It was also when clothiers began concentrating most on men’s safari wear rather than women’s. The Marlboro Man was on his way back!

“The fashion of casual clothing is actually a more important issue for guys,” says SingleGuyAdvisor.com. “Think about it, when was the last time you thought, ‘That purse is ugly.’ But women look at men everyday and think, ‘He looks like a dork. I hope he doesn’t talk to me.’ And that dork might be you.”

Our information manual gives clear recommendations on what to wear on safari, and believe me, you won’t look like a dork!

Fortunately, this season is taken care of, because according to AskMen peach and pink are the colors of the season, both of which usually have a low brightness coefficient: 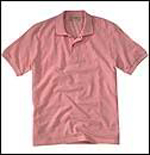 And that’s what we need on safari above all, calmness and health.

What is most satisfying about “getting it right” when you, as a man, dress properly for safari, is that you are communing not just with nature, but with the long history of African peoples.

“Some popular types of earrings worn by men are studs and hoops made with metals like gold, platinum, copper, steel and silver,” writes the men’s fashion blogger Anamika S. 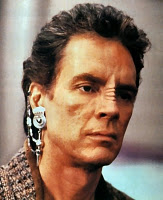 “There are several references in the Bible also concerning earrings,” she continues. “Wearing earrings in one ear (on the right lobe) is considered as a mark of homosexuality. But this is just a misconception. There are also criminals using this misconception to misguide people. Some parents also think that wearing an earring means that person is becoming a hippie.”

We have banned both hippies and criminals from safari ever since 1983.

So as you can see, a man’s enjoyment on safari is linked part and parcel to his wardrobe. Above all don’t forget the two Bs you’ll need, dude: Binoculars and Bikinis.