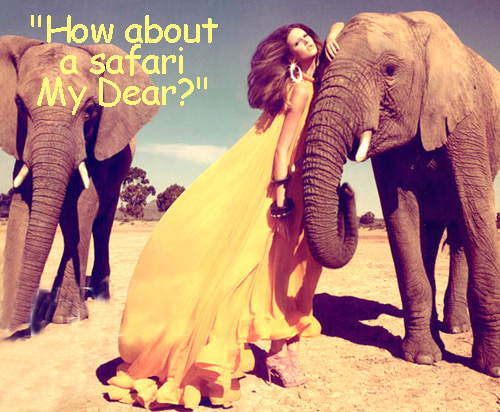 Years ago I guided teachers, bankers, students, lawyers and plumbers on safari. Now, I guide bankers, lawyers and brokers. What’s happened? It’s simple. Like so much in life, safaris have become too expensive for the average Joe.

Now to be fair, it was never as easy for a teacher to go on safari as a banker. And unfortunately we never saved the actual demographic data. But I can assure you I really did guide lots of teachers and as a percentage of overall clients they’ve decreased substantially.

It isn’t just the current economic downturn. It’s a trend, and I decided to find what “in life” has increased as much as a safari’ cost. Answer? Lexus. 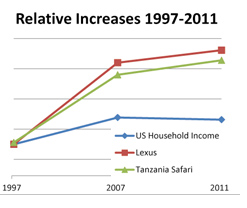 Costs have increased for all sorts of regular reasons like the price of fuel and food. They haven’t increased because salaries of workers have increased, and therein lies the schism. Household income hasn’t increased. There’s less for anything but just getting by.

Now as we all know, that’s not true of the richest of us. The rich are absolutely getting richer, even though as a percentage of the population they’re growing smaller. So our pool of safari travelers, just as the pool of potential Lexus buyers, is decreasing.

The latest proof of this is a white paper being circulated among Kenyan officials that would ban minibuses in national parks.

Minibuses save about 50% of the transport costs over 4-wheel drive vehicles like Landcruisers, and they have been the mainstay of the lower markets. A new minibus is actually a more comfortable ride than a Landcruiser. It lacks the power, of course, and that means it can’t travel as remotely as a Landcruiser, but in parks like Kenya’s Mara that’s not necessary. 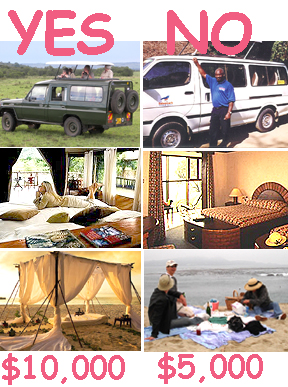 But Kenya’s tourism minister, Najib Balala, told a Kenyan newspaper that “Using mini-buses is cheap” and that Kenya had to portray a more upmarket image.

I can’t blame Balala. For years the costs of safari have increased far faster than median income from any of the safari markets. In the last 20 years, American median income has risen hardly at all, whereas the cost of a safari has tripled.

But the salaries of drivers, customer relations staff and even managers and hoteliers has hardly moved. Like median income from source markets, those graphs are flat.

So ultimately, who gets these enormous increases?

Well, the government fees for national park entrances are clearly an increased revenue source for those governments. And in places like Kenya and Tanzania, for instance, this piles up directly into the general revenue fund.

But the lodging and transport hikes derived from fuel and construction costs are going to the providers of those things, the owners and stock holders of oil companies, potash mines and manufacturing companies.

And it isn’t just safaris, of course, that I lament. In my life time I’ve watched natural and cultural attractions like national parks, city zoos and opera houses become more and more reserved for the rich and powerful. And the rich and powerful are becoming richer and more powerful even as they become a smaller segment of our society.

My own safaris cost has skyrocketed and I’ll be the first to tell you I’m not the principal one to profit. I’ve watched the cost of good, solid albeit mass tourism lodges like Sopa’s Ngorongoro property in Tanzania increase from $140 per room in 1994 to over $450 per room today. And believe me, the radiators still don’t work!

Yet I can’t consul Sopa or anyone else to do anything differently. The thresholds we have to look at today aren’t the top thresholds but the bottom ones. What?!

That’s right. Balala is exactly right. Prices that look “cheap” detract from selling. If even the product is truly cheap, its chance for selling is greater if it’s priced higher. We are appealing to the rich, no one else anymore.

I’m not blaming anyone. It was probably inevitable in our global economic system. But it’s sad.