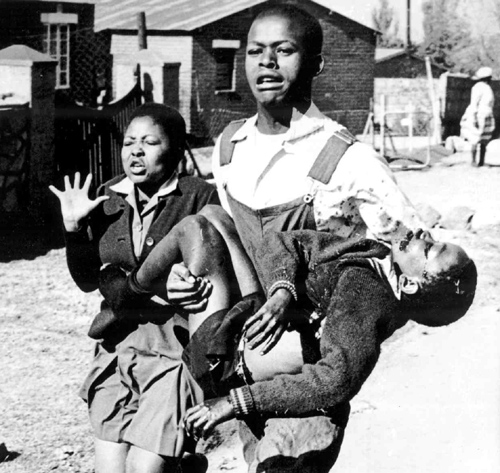 Today perfectly demonstrates how America helps lead Africa out of the ignominy of racism and bigotry.

Africa often moves with about a ten to fifteen year lock-step delay to America’s own progress on cultural rights. Today is the 40th anniversary of the Soweto uprising that began the last great offensive against apartheid. Twelve years earlier America adopted the powerful Civil Rights Act after a decade of protests.

Today the LGBT community in Kenya lost their first high court battle against the country’s anti-gay laws, yet the very fact it reached the court indicates that LGBT community’s growing influence. Consider how fast the LGBT movement’s successes have occurred here.

In fact cultural changes throughout much of Africa are happening with even greater speed than they did in America, because much of emerging modern Africa is hardly a few generations into self-governance.

It’s Youth Day in South Africa. The moniker honors the mostly primary and secondary school students who 40 years ago marched in protest to new apartheid laws and got massacred by South African police.

The horror of the mass slaughter of hundreds of children was immediately transmitted around the world with the photo taken by photojournalist Sam Nzima showing the dying student child, Hector Pieterson, being carried from the protests.

Each time I take a group to South Africa we visit the incredibly moving Hector Pieterson Museum in Soweto. As in the Apartheid Museum many displays are mostly black-and-white, such an appropriate adjective for the times and the struggles which ended them.

The Soweto protests attacked an apartheid regulation requiring non-white South Africans to be taught in Afrikaans rather than English or any of the native languages.

Many protested – as so well documented in the Hector Pieterson Museum – for very practical reasons: Soon to graduate students had spent their lives being taught in English but were suddenly confronted with final exams in Afrikaans.

Today quite a few South Africans are remarking on this Youth Day that it is the youth, again, who are integral in the country’s current protests, this time like 40 years ago, fired by controversies over the language of public education.

Most of the horrible apartheid laws were passed in the 1950s to virtually no opposition from the outside world. The end of World War II gave Afrikaans leaders sufficient cover to legislate a horribly repressive regime.

But as the anti-apartheid movement grew within South Africa, there was a wicked resurgence of new laws and regulations that greatly tightened the noose around South Africa’s majority non-white population.

Yet even by 1976 South Africa remained under the public radar of most of the world. The western world was in the depths of the Cold War and South Africa was considered the lone and essential partner in a continent increasingly socialistic.

But the Soweto protests began the galvanization process worldwide. European sanctions came not too long afterwards, and President Reagan suffered a humiliating defeat when Congress overrode his veto of American sanctions against the apartheid regime.

So it was the Soweto protests more than any previous event that moved the anti-apartheid forward.

Equality irrespective of race is a human value that because of our Civil War probably has more currency in American society than any other. The battle never ends, of course. The racist backlash in our current political discourse is proof enough of that, and the current student protests in South Africa are as well.

But for as long as we uphold and protect these civil rights, the unthinkable murder of Hector Pieterson will not have been in vain.