In two weeks, South Africa will be formally accepted into the BRIC grouping of Brazil, Russia, India And China at an economic summit in Beijing. 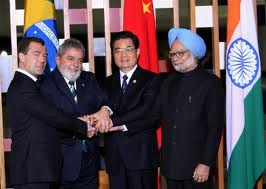 Just in case you don’t read US weekly—these are the new cool kids on the block.

Gone are the days when the EU was pinnacle of diplomatic achievement.

To be hip now is to be BRIC.

That depends on the criteria.

When Goldman Sacks asset management chairman Jim O’Neil coined the term, he intended it to refer to countries of sufficient size, with favorable demographics, and with an economic environment that would facilitate high growth.

On these measures South Africa does not make the cut.

Do all the European Union member states share a similar cultural or geographic background? (Only if the term “similar” is stretched to the breaking point.)

Does the G20 contain the world’s top 20 economies? (No – South Africa, a G20 member, is actually the 27th largest economy in the world.)

BRIC is no longer merely an economic distinction.

The BRIC club is now a political grouping of countries based loosely on their relative economic influence among developing countries.

In this way, it has the same freedom to act, or to change membership, as any other political-economic grouping, such as the G20, EU, NATO, etc.

The BRIC leadership has shifted its membership criteria away from the founding mantra of large economies experiencing rapid growth to politically important countries whose membership would add value to the BRIC grouping.

This is a well trodden path.

Why did/does the EU extend membership to some of the Balkans?

The Balkans’ economies did not resemble the Western European founding members, nor did the mainly Slavic Balkans’ languages relate to the Germanic or Romance languages spoken in Western Europe.

The EU’s founding members offered membership to select countries in the Balkans in order to encourage the applicants’ respective governments to make the right social and economic choices, and to pacify the zone on traditional Europe’s borders.

Should Turkey be a member of NATO, the North Atlantic Treaty Organization?

South Africa’s 50 million people and lackluster 3% growth may lead Jim O’Neil to shoot it down in favor of countries like South Korea, Turkey, Mexico, or Indonesia; but South Africa offers the resource hungry BRIC countries something those other options do not—access.

Access to a continent teeming with ore, industrial metals, and newly minted consumers.

Pundits have been asking the wrong question: they insist on questioning whether or not South Africa merits the BRIC designation based on its size, growth rate, population, etc.

The real question is – does South Africa provide enough value to all four of the current BRIC countries?

That is the ‘merit’ that matters for this lunch table.