I hate to give Facebook anymore publicity then it already gets, but a post on Online Africa was interesting enough to bring to your attention.

In 2010, Facebook gained its 3 millionth member in South Africa.

That means that Facebook use has been growing at near 25% for at least the last two years. See this post by Eshaam Rabaney for a more detailed breakdown.

Predictably, this growth has been most intense among 18-25 years olds.

However, U.S. readers should remember how quickly Facebook spread from young socialites, to their parents connecting with old friends, and even to the grandparent generation connecting with their tech savvy grandkids.

African Presidents are even adopting Facebook! Goodluck Jonathan in Nigeria is particularly active, as are a number of South African politicians.

Scroll to the bottom of this Online Africa post to connect directly to the FB pages of African leaders. I would go ahead and friend all of them with public profiles. 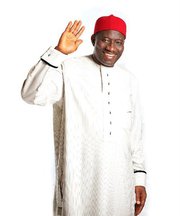 Lets check out the two latest posts from President Goodluck Jonathan of Nigeria:

“In keeping with promising less and delivering more, I promised revival of our railways. If you live near tracks, you may have noticed that promise is now a reality. Trains are now gradually getting back on tracks. We met a rail service requesting attention and gave it support. It is the same way that we will bring life to every sector in Nigeria with your help. GEJ”

Embattled Ivorian Laurent Gbagbo has also been rallying the troops on FaceBook.

South Africa is far ahead of the rest of the continent in terms of usage (Egypt excepted), but some other countries are catching up fast—very fast. Ghana’s number of FaceBook users grew by 9.6% from February to March 2010! Morocco (7.6%) Tunisia (7.7), Nigeria (6%), Kenya (2.4%). As internet penetration increases these numbers are likely to increase dramatically. Find all the data here.

So what does this mean to Africa? Is it really important that South African teenagers are even more aware than they already were of the minute details of each other’s lives?

Anecdotally, the need to get Facebook is in many ways driving internet adoption among the younger generation.

These Internet and communications skills will make young Africans far more competitive in the information economy.

While the primary motivation for adopting Facebook may be social, the commercial implications of this trend are immense.

In more developed markets like the U.S or U.K. Facebook advertising is already drowning out traditional media.

The site is also more then simply a distribution channel.

Modern consumers want to feel a connection with the people behind the products they buy.

Facebook allows companies to post videos introducing potential consumers to their employees, or pictures and profiles that capture the company spirit.

Creating this type of connection with customers is no longer just a nice touch—its required.

The political implications of this type of media have already been discussed in this space, but I can’t resist one parting shot…look here for status updates from Monsieur Mubarak.