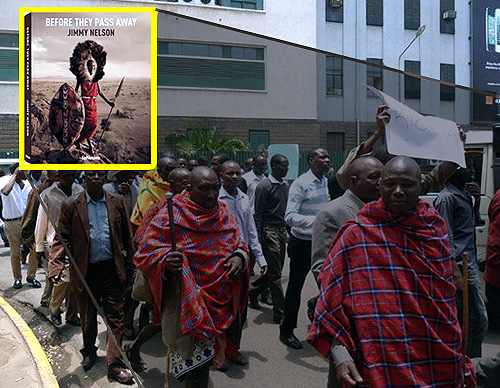 Tourists who want to see a “primitive village” are people who know dangerously little about the outside world.

One of the most successful cocktail table books to ever be published that includes much from Africa is Jimmy Nelson’s Before They Pass Away. I’ve had the book since it’s been published and its value just increases daily.

But criticism of the book and its exponential earnings curve has reached a crescendo. Indigenous people around the world are growing more and more incensed the more popular and famous the book becomes.

The unending appearances by Nelson with his original prints, which are routinely now auctioning for more than $150,000, now regularly include indigenous people protesting outside the galleries and bookshops hosting the exhibitions.

The protest campaign is being led by Steven Cory of Survival International. The organization publishes a running critique by indigenous leaders around the world of Nelson’s book.

Cory calls the book “hokum” and “hubristic baloney.” Cory points out that the so-called “primitive people” who still exist are hardly going to “pass away” and in fact are becoming more and more politically powerful.

“If his images look like they come from the 19th century, it’s because they do,” Cory concludes. None of the peoples exist today the way Nelson portrays them: Cory documents that Nelson’s photo shoots are all carefully staged, rearranging reality to what rich westerners want to think about people in remote parts of the world.

The people who make Nelson’s book so valuable, and my clients who insist on seeing Maasai villages, are not by any means bad people. There’s a good motivation and a bad motivation resident in most of these folks’ desires.

The good motivation comes from a self-recognition, an admission if you like, of their global myopia. It’s extremely encouraging that travelers go somewhere blind, worried possibly at how little they know but hungry to know more.

The bad motivation is a deeply set racism. The tourist thinks of herself as so much more intellectual, skilled, trained and educated, than the so-called “primitive person.” She wants to see this “with her own eyes” precisely to validate this lofty presumption about herself.

Unfortunately tourism’s response is so out of whack that the initial, well-meaning desire by good folks is cast aside to the more marketable validation of primitiveness.

So there are hundreds of “villages” that charge excessively high rates that tourists dole out without a blink so that they can see sick kids in smelly, dirty homes. It’s absolutely incredible how fooled tourists can be.

It’s infinitely easier to show a tourist in a half hour a sick kid in a smelly, dirty home, than convey to them how the Maasai Environmental Resource Coalition (MERC) is saving the ecosystem for the whole world or how Twaweza is providing better education to all children in East Africa.

What I’m saying is that there would be many, many fewer sick kids in smelly, dirty homes if there weren’t so many tourists paying to see them.

Or if there weren’t so many people paying so much for Jimmy Nelson’s book.