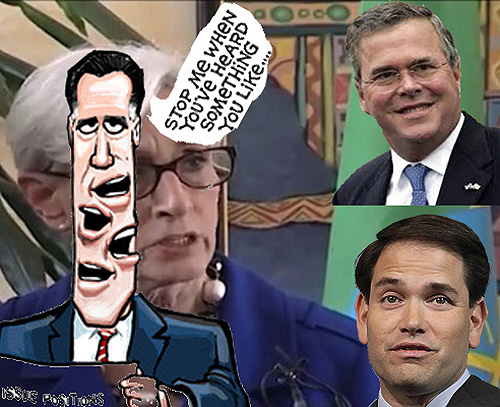 For me it’s a turnoff, a reason to criticize and withdraw support. The flipside is just as definitive: it’s why I wish Americans would elect more Senator Warrens and Feingolds.

But politicians do it because it works. They bolster existing support or garner new admirers who apparently “don’t get it” that double-speak is the ploy that entraps them.

Ethiopia has an election scheduled for next month. As with all elections in communist and authoritarian states these are political shams, not real elections. There are no opposition candidates.

It is like the “caucuses” that choose the leaders for most of Chicago’s north shore communities, from mayors to school board presidents. A group of ‘learned leaders’ gets together and chooses single candidates for each position who then run in “an election” without opposition.

Obama’s Undersecretary of State, Wendy Sherman, was captured on video in Addis Ababa recently declaring that “Ethiopia is a democracy that is moving forward in an election that we expect to be free, fair and credible.”

The Global Peace Index ranks Ethiopia 139 of 162 countries analyzed. The index is determined by a country’s “absence of violence.”

Ms. Sherman, undaunted, replied with a letter back to the Post which began, “Ethiopia is a valuable partner in a critical region, from peacekeeping to fighting al-Shabab to pursuing peace in South Sudan. Ethiopia, among the world’s fastest-growing economies…”

Now in fairness to proponents of double-speak, it’s not known exactly what mistake Ms. Sherman made. Did she misspeak when saying Ethiopia was developing a democracy? Or did she not intend that her remarks get home? In other words was this double-speak to build a relationship with a regime that is one the most ruthless on earth?

There is no real election coming up. It will be rubber stamping the current regime with a fraudulent tabulation of presumed voters.

Human Rights Watch explains why there could not possibly be a real election:

“Thirty journalists and opposition members” are in jail for criticizing the government, “security forces responded to protests by Muslim communities with excessive force and arbitrary detentions.

“The Ethiopian government continues to forcibly resettle hundreds of thousands of rural villagers… relocating them through violence and intimidation.”

But guess what? Ethiopia’s doing well, economically. Guess what else? It doesn’t like al-Shabaab or al-Qaeda. More and more economics and the “war against terror” seem to be the sole bases by which societies most admire one other.

Jeb Bush and Marco Rubio will not say or will not not say whether invading Iraq was right or wrong, but through mastering double-speak they will say everything but. (I’m beginning to wonder if the real reason for the Iraq War was that GW knew without one we would fall into the Great Recession, which we did just as a new president was arriving to stop it.)

Here’s my dilemma with regards to Ethiopia – or China at the bottom of the scale of democracy and human rights – all the way up to the presumed clarion caller, America:

Democracy can really screw up a good situation. As Ms. Sherman was quick to point out in her reply letter to the Post, Ethiopia is reducing poverty and providing social services to its population at a remarkable rate. Much faster, for example, than democratic Zambia or Liberia.

If suddenly all of China, including half the population that can barely read or write or even understand the native language of the candidates, were allowed to vote, what would happen?