Julius Malema took the stand for the last time in Johannesburg today.

It has been the most colorful of trials.

Most days it seemed more like a star-studded South African concert than a trial, as cabinet members, poets, and even the controversial Winnie Mandela have all paraded through the halls of justice.

At issue is ANC Youth League President Julius Malema’s refusal to stop singing “Dubul’ Ibhun” (isiZulu for “Kill the Boer”…depending on whom you ask, the name could also be “Ayesab’ Amagwala or “Cowards are Scared”).

An Afrikaner interest group had the audacity to suggest that Malema’s repetition of “Shoot the Boer,” or “One Settler, One Bullet” constituted hate speech, or an incitement to violence. 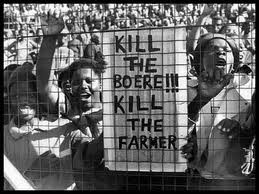 How could they possibly have got that impression?

If a bunch of former Black Panthers staged a rally in Time Square and began singing—“One Bullet for Every WASP!,” or “Shoot the White Capitalists!,”–how would people react here in the US?

I imagine not to well. But maybe that is not the right analogy.

Malema and his star-studded defenders argue that the song is a part of history, a testament to the struggle if you will.

They claim that the lyrics are proverbial—aimed at the system of oppression as opposed to individual South Africans of European descent.

This argument is too pedantic for South African realities.

Racial violence is not a long forgotten moment in history.

It happened yesterday, and the day before, and on a massive scale, just two decades back.

In France, the national anthem (La Marseillaise) is a violent, bloody affair:

But people are not arming themselves after hearing it sung at a football match and then going in search of the nearest wealthy people.

It also turns out that “Shoot the Boer” was not even an integral part of the struggle.

Some members of the Pan African Congress (PAC) sang the song in the 90’s, but it was never one of the rousing struggle anthems that Umkhonto we Sizwe (Spear of the Nation- armed wing of the ANC) heavy-weights like Ronnie Kasrils, Baleka Mbete and Pallo Jordan helped compile into a definitive album of struggle songs.

See here for a list of the 25 songs on this Album. 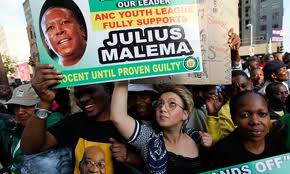 Malema is loose cannon and his mere presence ratchets up racial tension: if the court rules that the speech is protected by South Africa’s wonderfully liberal constitution, than the ANC should clean its own house.

The ANC is a big tent, with room for almost everyone—but not racists.