Before we talk about Fela! I feel like its only right that you put on some music from the larger-than-life band leader Fela Anikulapo Kuti.

If you don’t like that—try “Water Don’t Get No Enemy.”

On April 21st, the musical “Fela!” brought the Lagos crowd to tears during the debut Nigerian performance of this headline grabbing and phenomenally reviewed Broadway hit. 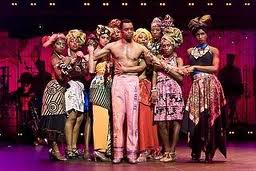 Here is a sampling of reviews from the New York Times, Chicago Tribune, and the Associated Press.

After a two year run in New York on Broadway Fela!, will become the first Broadway show to be performed in Sub-Saharan Africa.

This is one of the thousands of little signs that Africa is emerging on the U.S. radar like never before.

Fela Kuti was a bonified international mega-star for almost three decades, but was of course unknown to a Broadway crowd “where theatergoers’ idea of African music might begin and end with “The Lion King.” (New York Times)

Fela Kuti defined Afrobeat for an entire generation of musicians. 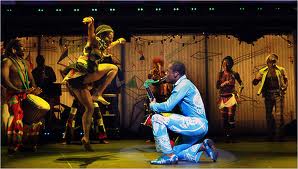 The main Fela! webpage lets you listen to a long list of songs performed for the show for free.

The real Fela Kuti was not simply a celebrity—the impression I get from reading about him and speaking to Nigerians is that Fela existed on a different scale—he proclaimed an autonomous republic in his club, he married 27 woman, he smoked and drank prodigiously, and he railed against the arbitrary and oftentimes brutal Nigerian dictatorships that had cowed most of the country—everything was in excess.

Whether you loved him for his brash unorthodoxy, or hated him for challenging the moral majority—you did so with a passion.

I do not have space here, but you should read this short biography of Fela to understand a bit more about the man himself and the passions he aroused.

He certainly aroused the passions of Muhammadu Buhari—the military dictator who beat, jailed and otherwise victimized Kuti, and who is now protesting the present election in the North.

Fela Kuti believed his primary goal was to resist European cultural imperialism. In this way, he echoed his contemporary larger-than-life star Bob Marley.

Pursing this mission, he blasted everyone and everything—he hated capitalist greed, and communist autocracy.

He hated the moral conformity of Arab-Islamic or Judeo-Christian values.

He even hated tribalism and traditional African social mores that he found constricting.

His remedy— a modern set of African values, taking some wisdom from the past, but mainly looking toward the future.

I love the fact that this extraordinary person finally washed ashore on Broadway, and get a bit of an emotional tug when I think of a sold out crowd in Lagos getting the chance to love or hate Fela Kuti one more time.

In some ways, Fela! allows the late great Fela Kuti to reach from beyond the grave and help the continent he loved engage the modern world on its own terms.