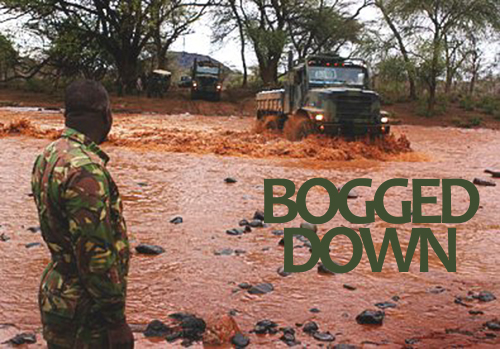 In a topsy-turvy world where rain is not good and war is fought in daylight as you sleep, the sum total of the world’s misery explodes, and you prepare for Thanksgiving.

Kenya’s invasion of Somalia will be long and self-destructive unless the west decides to increase its military involvement, or unless Kenya figures out a way to spin failure and go home. For the sake of Kenya, I hope the latter.

The BBC reported today that the Kenyan military chief has conceded that the operation is taking longer than expected. As we well know from our own adventures, this is soldier-talk that the original drawing board was pure fantasy. I said a week ago that we would know today whether the operation was going to achieve some success in a reasonable time or not.

All we can hope for now is that Kenya will study carefully the history of Ethiopia’s invasion of Somalia five years ago and go home, and hopefully much more quickly than Ethiopia did.

But I doubt that, too. It isn’t just a matter of Kenyan national pride, now, but enough hard evidence emerged last week that we are now certain both France and the U.S. are pushing Kenya hard to do exactly what it’s doing, softening the enemy.

Whether either of those super powers, which are sending occasional missiles from off-shore and drones from secret bases in the area, has a threshold for greater involvement is hard to say. France is never shy about military involvement, but Obama’s reelection could be seriously jeopardized by more overt action.

Today, Kenya’s prime minister told a meeting of African leaders “not to blame foreigners, but ourselves” for the military involvement in Somalia. Hopefully, local Kenyans took that to mean “giving room to the West to intervene.”

“Military action risks worsening the effects of famine on the Somali people, and pushing more people ‘beyond the reach of aid agencies’,” the international aid group, Oxfam said Friday.

And there are more and more refugees.

And while the BBC reported today that good if not better than expected rains “have eased the drought“ that news isn’t welcomed. There are so many displaced persons, no crops that have been planted and no plants to hold the water, that the effect of the rain is erosion and disease.

And within Kenya a “Patriot Act,” similar to our own despicable human rights atrocity, is gaining momentum as Kenyans fear retribution is certain.

It is a very grim story to tell, today. I can’t help feeling that it’s our fault, and by “our” I don’t mean the Democrats and President Obama, I mean western society for a hundred a years of selfishness and greed. There is just so much wealth in the world, we can extract natural resources at just a certain rate. There is limited comfort as a result, and we have reached the point that to maintain a modicum of what we historically achieved, much of the world must squander in abject misery and war.

Yes, to use a favorite nonpartisan political phrase, we are blessed… to be here, rather than there.