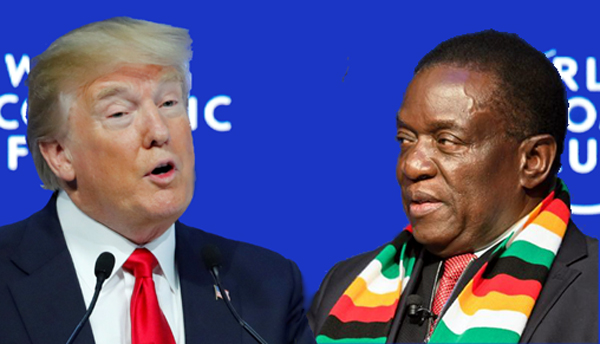 Each constantly starved for attention, an American and an African leader in DAVOS today separately made news with their patently disingenuous pitches: the American Trump that he wants free trade, and Zimbabwe’s Mnangagwa that he wants free elections.

Nobody believed either. So what’s the point?

DAVOS is not a political gathering but an economic one, and in fact a gathering of the economic elites. Nelson Mandela was one of the first political leaders to address the conference, and since that time in 1992 the forum (technically known as the “World Economic Forum”) has grown in political importance and more world leaders attend each year. DAVOS is the clearest affirmation the world has that economy and politics are interdependent.

Both men – Trump and Mnangagwa – hold economic prosperity as their highest priority. Like most of the business leaders present, neither came to power winning a majority of their electorates. There is enormous similarity between the CEOs and hedge fund managers and Trump and Mnangagwa.

But both must play to world public opinion, so they both pander democratic ideals and free marketering which few at DAVOS embrace but all must claim to.

Trump desperately needs affirmation, and not just for his quirky personality or insecurity that he was never been welcomed to DAVOS as a businessman.

American politics is a super complex game and one powerful pothole is favor with the public. American opinion is slowly moving against Trump, as it happens with most presidents their first year in office. Trump’s support, however, was so little to begin with that any erosion is catastrophic. His noncontroversial speech at DAVOS and his civil public Q&As has so far earned him unexpected accolades that are very valuable chips in the American political game.

Mnangagwa came to power in a coup, and there are few forums in the world that will greet him as much as DAVOS. Before he came to power as an exile in China he became a powerful champion of economic growth.

Zimbabwe is a resource rich country and one with unusual agricultural potential, something increasingly rare in today’s world of rapid consumption and modern development. Zimbabwe was also – and probably still can recover, considerable intellectual and creative power.

Strapped now for nearly 40 years by the soldiers who liberated it from an immoral and racist regime, its economy has been strangled by those brutes seeking compensation they never felt they got enough of.

Mnangagwa was there from the beginning and there are many who believe he won’t be considerably different from his predecessor and for years close ally, Robert Mugabe. On the other hand the public uprisings in Zimbabwe that absolutely contributed to the change of regime must haunt him, and he knows the greatest public discontent is with the economy.

In fact Zimbabwe’s economy is so bad and stands in such surprising contrast with its evident potential that it’s already improving, and Mnangagwa hasn’t yet changed very much of anything.

That’s a rather attractive situation for a start-up.

As for Trump, though, I wonder if the titans of world business are really that much dumber than me. Trump will cast aside free trade the moment Fox News and Limbaugh tell him to do so. I’m actually expecting the far right to flip into the far left very soon.

Trump has had few people to answer to besides his family. The economic leaders at DAVOS are networked into a web of self-support and each depends upon the other. That’s a college of security Trump has never penetrated and for good reason: Business titans don’t trust him.

Mnangagwa’s success looks more promising. World business doesn’t practically care how a country is governed, so long as it’s stable and has some positive long-term upside to the bottom line. Mnangagwa can pull that off by promising heaven and earth, using all the right phrases like “free elections” and doing little more but easing some of Zimbabwe’s provincial native ownership laws. He’s already promised to do so.

So as two lying, insecure men, Mnangagwa’s journey to DAVOS shows much more potential than Trump’s. Business titans aren’t known for their IQs but their guts for enrichment are unchallenged. America is too good for Trump. With no viable alternative anywhere in the wings, Zimbabwe is aching for Mnangagwa to succeed.