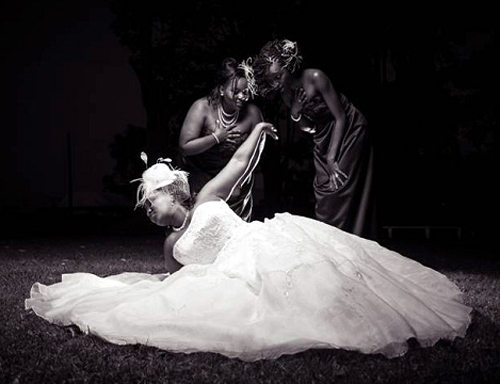 One of Nairobi’s most talented artists is Osborne Macharia. His K63 Studio is a sought after commercial enterprise by everything from chic weddings to fast cars.

I thought I’d leave you this week with some of his digitally enhanced photos, which evoke enormous reaction from me.


The modern young progressive African guy is having trouble. His machoism is continually suppressed … by his peers, by his mentors and mostly, by himself.

Traditional African culture is as misogynistic as you can get. Polygamy doesn’t say it all, by a long shot. Whether a traditional family was rich or poor, the woman did all the work, and I’m not talking about house chores. She toiled the land, harvested the crops, sold the crops, distributed the crops … and raised the kids while submitting to the man’s every whim.

This generation of kids is several or more generations from that life style, but it’s still a much greater difference between their grandparents than ours, for example.

One of the residues of a progressive, educated man trying to fit into the modern world — or so it is widely believed — is that the man becomes too submissive and grows easily manipulated by every woman who gives him a glance!

Income disparity in modern places like Nairobi is — I hate to admit it — greater than here at home. This is the real festering soul of Africa, not ebola or terrorism or even poverty per se — but the difference between men like Kwangare and those who cause Nairobi’s traffic jams wrecklessly driving their hundreds if not thousands of Mercedes every day.

I see it as a fundamental problem of successful capitalism overlaid rapidly developing cultures that are so out-of-control dynamic like in Kenya.

We’re in a state of affairs right now in places like Kenya where the disenfranchised and displaced are so suppressed that the country as a whole is just shrugging its shoulders and ignoring the inevitable. The poor sot who works all day for a dime then goes home to an 3-room apartment shared by his extended family, that in turn shares a bathroom with four other apartments … well, you get the picture.


Freedom of expression and freedom of the press in places like Kenya is being applied to an exaggerated fault, just like it is, here. The kids in Nairobi make fun of it all the time.

In America, today, we’re so inured to the ridiculous concept of objectivity that it no longer offends us that Anderson Cooper invites a “panel of experts” that includes a climate change denier … to be “fair and balanced.”

Well it happens too all the time in the Kenyan media, and Nairobi youth in particular see it as a caricature of substantive problem solving.

I can see in the bony neck and starved face of Osborne’s Gender Based Violence piece a continuation of the gender conundrums of the first piece above, Man-ipulation.

The woman in this picture is an amalgam of a peasant, a witch and a modern gal. Although the three reside in radically different places in Kenya’s rainbow culture, although their education differs widely, they are still equally suppressed and abused.

And like our own situation recently to the fore in the NFL, it’s deeply engrained and horribly facilitated by the so-called modern cultural kingpins.

This brilliant piece was commissioned by Oxfam, one of Europe’s largest aid organizations.

I would have liked Osborne to have moved even beyond Man-ipulation and Gender Based Violence and deal with the most egregious of all gender-based discrimination in Africa, that against the LGBT community.

Next door Uganda is ready to hang every gay, and very similar sentiments have been raised in Kenya’s own Parliament. There is a vibrant and courageous LGBT community in Nairobi. I’m sorry Osborne doesn’t see fit to represent them.


Hope in The Delta could be from any of a multitude of different places in ecologically stressed Africa, from the Kalahari desert to the oil rich jungles of Nigeria.

In these places the aboriginal peoples are mostly ignored, as they have been since colonial times. Their development is compromised by a constant struggle between modern resource extraction and traditional life-ways.

And you can guess who wins that battle.

I think that Osborne by depicting an old lady who has somehow found contentment if even amusement as she stares over her pillaged land has captured both the patience and quiet self-confidence of Africa’s forgotten aboriginals.

It’s a melancholy that’s so easily taken advantage of, but at the same time it’s a spirit that’s remarkably enduring.


Nothing very deep about this beautiful piece created to promote one of Nairobi’s very popular and increasingly important fashion shows.

This one featured super models from Nigeria and China.

Enjoy your weekend. I hope you’ll be thinking about Africa when you do!