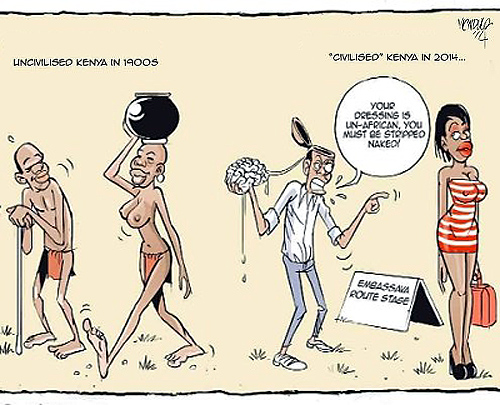 The whole damn world is turning conservative, but Kenyans are fighting back! The current battle is over miniskirts!

Last Wednesday while waiting for a bus at a stop in Nairobi, a woman was screamed at by passing matatu (private taxi cab) operators for wearing a miniskirt.

The protest grew rapidly and soon the woman was on the curb stripped naked. Kenyan authorities condemned the stripping and promised prosecution, but nothing’s happened so far.

The good side, the left choice above as usual, is composed of virtually all Kenyan elites and most modern educated people, and that’s mainly because miniskirts have come back in fashion big time in Africa.

Young kids populate schools in them and old ladies wear them trying to look young. From Nigeria to South Africa, miniskirts are in.

Typical of the good side are the oft repeated arguments that men’s reactions to scantily dressed women are reflections of their misogyny, dress codes presumed necessary for women are never applied to men, and that the constitution protects however a woman wants to dress.

Typical of the bad side is the universal presumption that dressing scantily is an invitation if not outright challenge for sex, politely presented in its obverse:

“Cinderella didn’t need to take off her dress to get Prince Charming. Neither do you.”

As expected the clergy clusters in the right corner and politicians cluster in the left.

Here’s what I find so interesting and absolutely encouraging about the whole kerfuffle:

In Zimbabwe or Georgia, that poor woman wouldn’t just have been stripped naked but raped and killed and we would have heard nothing about it.

In all of Uganda and even for some high school cheerleaders in America, miniskirts are already banned by authorities, so there’s no debate.

Need I mention radical evangelists of the Christian and Muslim faiths who find common ground here?

Kenya is dealing with this in a transparent and public way, and the voices of the correct side, the left side, are not being suppressed nor are they growing. In such a situation, reason will ultimately prevail.

In many conservative communities in America, in many right-leaning American cities and certainly in spit drooling revivals among many American evangelists, the story isn’t so hopeful.