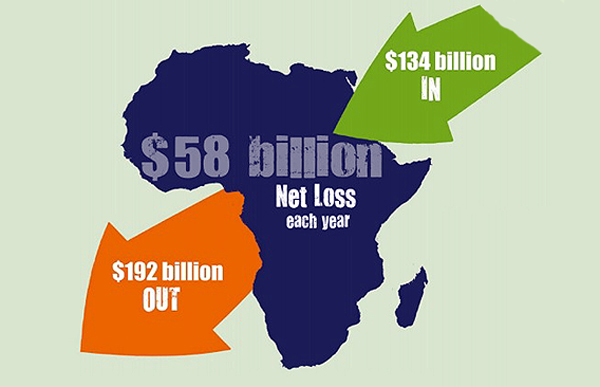 Truth is like the massive granite boulders of the Serengeti that have laid on earth for two billion years. They don’t move. Lies have no purchase on earth. They blow away.

“Whilst we are led to believe that ‘aid’ …to the [African] continent is a mark of generosity, research shows that this is a deception… Aid to Africa amounts to less than $30 billion per year [but] the continent is losing $192 billion annually in other resource flows, mainly to the same countries providing that aid.”

That report from 2015 published by Britain’s “Health, Poverty & Action” center is being dusted off along with others that were castigated in the frenzy of lies and misinformation that promoted Brexit. The irony is that the report, at the time, was widely considered as Remainers lying. It was used by Brexitiers as evidence as to why progressives could not be trusted.

(Note that the $30 billion reference is to non-military foreign aid. When military aid is added, the number can triple.)

The numbers were correct for 2015. It’s increasingly difficult to obtain current numbers as many countries around the world, especially the U.S., either neglect or impede statistical compilations. Obviously somebody is trying to hide something, but it doesn’t take a rocket scientist to know that (a) western political non-military foreign aid has been reduced by current governments of the crazies; and (b) until just recently western governments were growing rich quick.

So this report which carefully documents a net outflow of capital from Africa in 2015 of almost $200 billion is likely much worse, today.

The arithmetic is pretty easy.

INFLOW
There’s government non-military aid of about $30 billion. This includes programs for education, agriculture, infrastructure, and all sorts of training.

Private organizations including all religious organizations like World Vision and NGOs like the Gates foundation contribute another $1 billion. This comes in the greatest variety of forms. It could be pure educational grants or it could be funds to distribute Bibles.

There’s $23 billion in additional loans. Most of these come from large international organizations like the World Bank and IMF. Interest must be paid ultimately, but it’s usually low interest and easily deferred provided the reason for the original loan remains viable.

In addition the World Bank lends about $8 billion to private companies very much like a bank would, encouraging specific sectors including tourism.

$40 billion is essentially foreign private investment. This often comes with all sorts of strings attached, though, and as much as $16 billion of that is not actually moved into Africa.

Quite interesting is the nearly $19 billion that is remitted to Africa by Africans living and working abroad. This contribution by the diaspora has made the diaspora a very strong political force throughout the continent.

About $5 billion represents the total combined foreign earnings of all African banks – central and private – from their investments.

The total of all the above is just under $134 billion.

OUTFLOW
The just over $20 billion in debt repayments is only the start, and it says it all. If you so grossly and even with a touch of racism simplified the entire inflow of capital as a “benevolent loan” from all the good willed people on earth – money that they wouldn’t have to give if they weren’t so big-hearted – then the “debt repayments” are 67%.

But that, of course, is only the start of the story.

Businesses have to make money, so stipulated. But because of the slavery era, then the colonial era, the only capital to start a business came from outside. And so the profits from most all of Africa’s significantly large businesses leave home.

A troublesome $35 billion occurs to “illicit outflows.” This is the first item, inflowing or outflowing, which is an indictment of Africa rather than the mendacious lenders and empire builders of the western world. It’s basically the cost of African corruption and it is significantly greater when relatively compared to other developing or developing countries. Africa is worse.

There are volumes of studies as to why, but frankly it’s hard to throw this down at the mantel of the current African. Imagine if you in your own city, business or home, suddenly learned that the way the world works was to constantly make you poorer. That’s motivation for crime, and that’s how I see a large part of this.

It’s critical to understand, Africans couldn’t illicitly transfer $35 billion every year out of their continent if someone in another continent didn’t accept it and launder it for them. Who’s mostly to blame?

It’s notable in the last few years how younger Africans are attacking corruption, and making a real difference in places like South Africa, Kenya and Tanzania. It’s incredibly noble, because they are attacking an understandable reaction to an unfair world, because they must believe soon the world become fair, and they want a steady ship governed by simple morality.

$25 billion is sent overseas by good, law-abiding African individuals and corporations because they believe investing abroad will generate them a better return. They’re probably right, but for the time being it depletes the African treasure.

Africa has to pay at least $4 billion annually to compensate necessary experts – individually and corporately – from abroad that Africa doesn’t have. Many of these are financial experts, but there are also health experts, agricultural experts, urban planning experts, etc. It’s likely if this didn’t happen the continent would suffer even more, so on this one item, think positive. But it remains a net outflow.

When this report was written in 2015, Africa contributed 4% to the world’s greenhouse gasses. Almost all African countries have joined the Paris Climate Accords and agreed to pay $26 billion annually to what amounts to a global carbon tax. It doesn’t leave the continent, but it’s money that’s not expected to grow business – at least not quickly enough. It’s flat outflows for developing non-fossil fuel urban transportation systems, for example. Obviously in the long haul this can be considered an investment, because like all moral and socially good investments, it will ultimately pay off. But for now, it’s an outflow.

Worse, Africa pays $11 billion for climate catastrophes that would not otherwise have occurred had the western world and Asia not emitted so much carbon.

The small difference to the chart above are individual transactions, mostly rich Africans buying unnecessary luxury goods or otherwise disposing of income on things like vacations. That’s for the whole continent, about $3 billion. Americans, one-third as numerous as Africans, spent more than $100 billion on vacations alone.

The net result is almost a $60 billion loss. This doesn’t mean that Africa isn’t growing – it is, impressively. And the results of that growth positively effect hundreds of millions of people. But the fruits of that growth, equity capital, are leaving the continent at $60 billion annually, ensuring that the masters of capitalism control Africa.