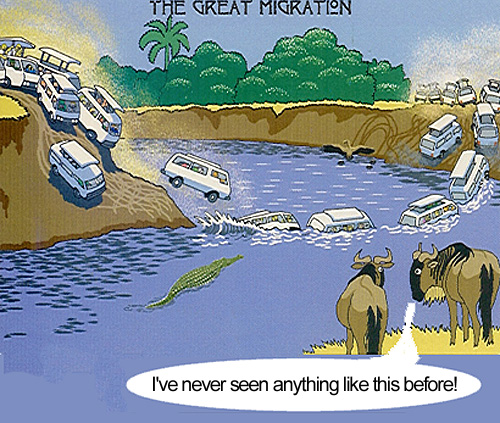 Reports of a massive drought in the game rich areas of northern Tanzania may be exaggerated, although the wildebeest migration is off at least a month. That doesn’t mean several months down the line everything won’t be in sync.

The media, today, operates on the assumption that “if it bleeds, it reads.” It’s no less true of Obamacare than of the Serengeti migration.

In the case of the Serengeti migration, no less reputable media than the BBC report that the unusual weather-related movement of the great wildebeest migration has “never been seen before.”

Hmm. “Before” is a relative term. The BBC was quoting an official overseeing Kenya’s Maasai Mara ecosystem and perhaps he’s young, perhaps he’s inexperienced, or perhaps he’s more interested in promoting tourism than the truth. I’ve seen “it” before.

“It” is when the great wildebeest migration veers from its normal pattern. In this case it’s at least a month off: Right about now the migration should be moving slowly but certainly south through Tanzania’s northern Serengeti. It isn’t. The bulk of the wildebeest are lingering in Kenya’s far north Maasai Mara.

Several times in my career I’ve seen this, as well as a real reversal which this isn’t … yet. It’s proof that the migration is not a neurological hard-wiring, but a response to environmental conditions.

Click here for a fuller understanding of a normal migration.

Normally, heavy rains occur in November and the first part of December. They then reduce substantially, although the rains do continue right through June. Heavy “normal November” rains don’t normally start up again until March.

This drives the migration, as the great herds go where the grasses are growing.

NOAA’s mid-term (March through May) forecast is for normal or better than average rainfall.

That means all safaris planned for March on — if NOAA is correct as I expect it is — will not notice anything unusual.

But safaris, for example, expecting to see the migration in the Serengeti in November won’t. And safaris planned for December-February will experience difficulties finding the migration as it likely fragments more than normal, depending upon how soon we return to normal precipitation.

(For local farmers, by the way, it could be worse: wildebeest and zebra will now seep out of the national park onto ranches and compete with cows for pasture.)

Remember, too, that most of the animals on the veld don’t migrate. Indeed, they all suffer with scant rainfall, although the predators often prosper at these times. But unless an entire year of abnormal precipitation occurs, most animal life cycles aren’t effected enough that a casual visitor would notice anything significant.

There is even an indication that right now things are getting better. Surveying a number of traveler blogs being posted right now, I find pictures with green grass and accounts of some rain, already.

It’s infuriating when media like UPI misstate the situation, along with much of its historical evidence. Respectable journals like the South African Business Daily were even more off-the-mark.

It’s always dangerous to analyze anything that’s dependent on the weather, and I always caution my clients to never presume they’re going to see the migration, ever. But the facts right now do not suggest that migration patterns in just a few months will be anything but normal.

We will certainly lose a fraction of the animal, especially the herbivore population. But that’s the wild.

And it’s hardly the end of the game.