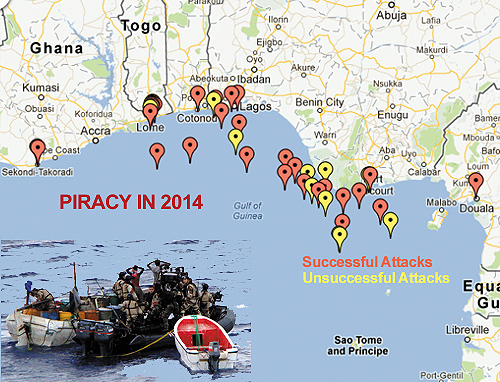 How many times around Africa, or the world, can you chase a terrorist? Piracy has now moved from the Gulf of Aden to the Gulf of Guinea.

Fans of the superb movie Captain Phillips will understand better than most (except readers of the New York Times or London’s Guardian) how high seas piracy is instrumental as seed money for “new” terrorists.

Then, once they get established, funds come from all over the world, starting with disgruntled or religiously extreme Saudis and spanning a wide range of bad people all the way to Hong Kong gangsters.

Then, they get their hands on big weapons and, game on.

But that seed money is fundamental. It comes from piracy or kidnapings or both.

We can’t ransom James Sotloff, but god forbid that we lose any oil or Camry’s. Yesterday, the Hai Son 6 secured its release from Nigerian pirates. The press release said the pirates got away with “some cargo” but I doubt that was the end of the story.

Obama and Hollande successfully chased well-funded terrorists out of Somalia over the last several years, and our proxy army of Kenya occupied their main port, Kismayo.

Now, they’re on the other side of the continent.

Almost two years ago, when the fight against al-Shabaab in Somalia began in earnest, Europeans immediately began seeing piracy not seen before in the Gulf of Guinea.

The European Union immediately set up a committee and fund with about $6 million to help Gulf of Guinea states combat piracy. No takers. Until now.

Yesterday in Cameroon the French ambassador (giving the money), all the big wigs from the Cameroon government (taking the money) and the Brazilian ambassador … Brazil? Yes, almost all the container traffic between Africa and South America occurs between Brazil and the Gulf of Guinea states.

What prompted these weak States to take more direction from Europe is the radical increase in piracy. Last year there were 32 pirate attacks of giant ships and 24 were “successful.”

“Successful” means the pirate’s got a ransom.

A month ago, authorities noted a “game changer” attack of piracy on a container ship in the high seas, much further off-shore than before.

“The attempted boarding of a vessel underway, especially at night and this far out in open seas, is a tactic … associated with highly motivated Somali pirates,” said Ian Millen, Chief Operating Officer of Dryad Maritime.

It was reminiscent of Captain Phillips: three speedboats overtook then boarded the vessel.

Because they were chased out of Somalia.

Game changer? They’re just playing on a different side of the board.

So now begins a lengthy time of European and Gulf of Guinea States chasing them away. And they will earn millions and millions of dollars, and be richer than they are now, which is richer than they were in Somalia.

And they will be chased from the Gulf of Guinea to Gulf of Tonkin to the Davao Gulf, etc., etc.

Until “rich” is stopped, this will continue ad infinitum. This means you don’t ransom ships, you arm merchant ships to defend themselves (currently highly restricted) and you stop the money chain.

Ultimately, you’ve got to deal too with the reasons terrorism exists in the first place. Try these on for size: