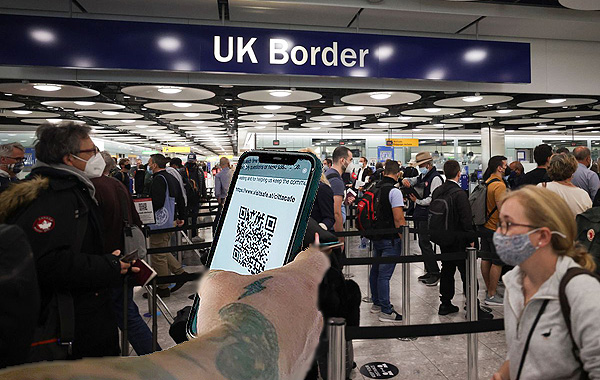 If you’re a resident in one of the twenty Republican States that are currently prohibiting vaccine documentation you probably already know that it will be much more difficult for you to travel outside the country than before the pandemic.

I anticipated this, but not to the extent it’s happening. It’s ludicrous and is making America the laughing stock of the world.

The rest of the country isn’t completely out of the woods, either. Because America can’t coordinate a single vaccine documentation (because of State resistance) there is no “QR Code” from America. That’s the way the rest of the world does it. Even Barcelona uses a Spanish QR code even as it foments succession!

“QR Codes” are those maizey boxes that most of the time you see on groceries that allows you to quickly scan the price. But they are used in so many other ways throughout America and the world.

The rest of the world – and literally, I mean the REST of the world – is divided into countries each that coordinate a specific QR code that certifies a citizen is vaccinated. It carries all the details of the vaccinations from the dates to batch numbers to actual locations where the shots were given. Many countries also include any side effects the individual might have experienced and any history of having had the infection.

The little CDC white cards and a dollar will get you a cup of coffee at McDonald’s. They have little other use, are easily forged and more easily damaged. They don’t even fit right into most wallets.

I was able to get into Tanzania with a QR code provided by my local county health department, and that’s one workaround but it won’t work everywhere. Last week Egypt announced that it would not accept anything but country-managed QR codes. It won’t even accept paper documentation or QR codes routinely supplied by pharmacies or certain hospitals that will work in many other countries.

As a result Egypt is considering every American to be unvaccinated. The only way to enter the country is by presenting a negative PCR test before boarding the flight from home, another test taken when you enter Egypt and visitors can be required to take tests during their stay by all sorts of authorities, including policemen.

As of last week all other visitors to Egypt than Americans require nothing to get in and stay in and enjoy the pyramids but the QR code certifying proof of vaccination.

They aren’t laughing at America, they’re scolding us. It’s pathetic.

U.S. embassies around the world recognizing this new self-inflicted American wound are coming up with novel ways to workaround it as well.

GlobalHaven has permission (though not yet from Egypt) to consolidate QR codes from pharmacies, hospitals and county or state health departments into a single “American” code. It represents a remarkable level of tolerance by many other countries in the world regarding our infantile predispositions.

But it’s no slam dunk. Documentation uploaded is often rejected and visitors to the site often must try multiple forms of “documentation” before it’s accepted.

Some countries like France and the U.K. will accept the state-generated QR codes, but others like Germany will not. France will even accept the white CDC card. But the fact is that all these separate responses to our inability to unify our documentation should be expected! Only America! is unable to prove vaccination.

And it’s infuriating how many in the right-wing media are decrying the “chaos” of a lack of uniformity in accepting … what? American’s promise that they had been vaccinated?

Some travelers are waiting to get their booster shots until they arrive somewhere within the EU, where it is often very easy to get a vaccination regardless of your origin. That automatically generates the EU digital code which will also incorporate all your previous vaccination history when properly manipulated.

This is all so ludicrous. I suppose the division of the 20 Republican States from the modern world might also suggest that citizens in those states aren’t interested in traveling abroad, anyway. Why should they? If you listen to Tucker Carlson it’s either Indiana or hell. No place like home, I guess.

Anger aside you can realize how much more difficult this makes our jobs in the international travel industry. I suppose the next step from the next Trump administration will be to ban passports. They’ve already effectively banned birth certificates.