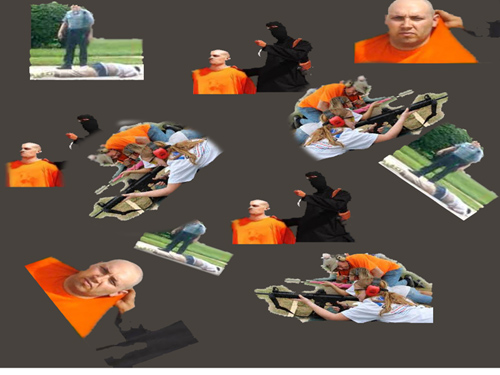 Rachel Maddow’s misleading account of East Africa’s recent terrorist attacks contributes to America’s rearming against the War on Terror, despite her better intentions.

On her show Tuesday night, Rachel sort of concluded as I hope many others do that we should not overreact to the recent beheadings of two American journalists.

Her analysis that terror succeeds when it provokes is spot on. And the relatively simple act of murdering two people, however gruesome it was albeit they were journalists and Americans, is about as provocative as you can get.

But in elaborating on the “gruesome” and “provocative” Rachel fell down that slippery slope so American of defining a situation worse than it really is, of exaggeration. Fear does this. It moves you to overreact.

In describing the abject brutality of al-Shabaab, she recounted incompletely the bar bombing in Kampala in July, 2010, and followed that with a similarly misleading recounting of the Westgate Mall attack in September, 2013.

(Al-Shabaab claimed responsibility for both attacks, although to this day it’s not completely clear the militant group held complete authority regarding Westgate. That tight knit group of terrorists who carried out the attack were mostly foreign and may have included the “White Widow”, no underling to Somali warlords who might aspire to be her boss.)

Rachel implied that both were indiscriminate if not random killings. This couldn’t be further from the truth. It doesn’t in any way justify them, but it does help to explain why they happened.

The first motivation for both is that the Ugandan and Kenyan armies viciously fought al-Shabaab. The Ugandans were the lead army in the UN so-called peace-keeping force that had been battling al-Shabaab for years in Somalia.

The Kenyan Army staged a much, much greater assault in October, 2011, a virtual invasion supplied, organized and probably managed from start to finish by America. The Kenya Army remains a significant occupier of Somalia.

The second specific motivation for the Kampala bombing was that it was in a bar of people watching the World Cup: recreation and alcohol. A bombing of that magnitude would have been far more devastating had it occurred in the central bus station or airport.

More to the point, however, it would have been far easier at the bus station or a dozen other places than in a security patrolled, modern sports bar.

The second specific motivation for the Westgate bombing was the decadence of a mall which on the Muslim holy day had something like a mini rock concert, and as with all the malls in Kenya, sold everything from liquor to ladies panties. Why Westgate in particular? Because it is the only mall of Kenya’s giant three owned by a Jew.

So it is not completely random, and as I said, that hardly makes it better or more justified. Rather I’m saying there’s method in this madness.

Rachel then described the failed Navy Seals operation two weeks after the Westgate Mall attack which attempted to take out one of the leaders of al-Shabaab. We got him with a later drone attack, and Rachel then pointed out how easily he was replaced.

I’ve written a lot about Westgate and terrorism. It’s hard to exaggerate the brutality of ISIS, yet we do. We do by failing to compare it with all the other homicides and murders and unnatural deaths and lack of simple human rights right in our own backyard.

We all exaggerate, as Rachel did, by considering the most horrible of acts random. They are, in fact, rarely random. If subtle, the world’s terrorists are very methodical. Their horrific acts, including suicide bombings, are cleverly and carefully designed to entrap us.

Exaggeration is knee-jerk. It leads us into wars. We take the bait of provocation.

Perhaps we nurture such forgetfulness so that we can retrieve the events later on, in calmer moments, when we are fitter to analyze them better, to determine less emotionally if new actions are called for.

So we should now do with the senseless murders of two journalists.