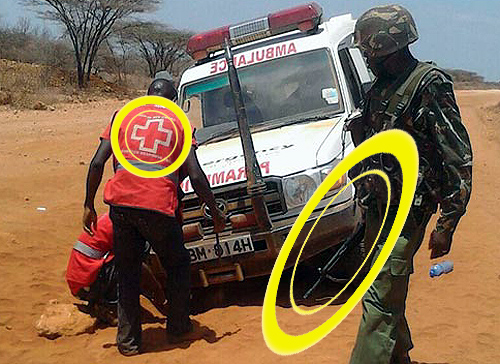 When the Kenyan Red Cross demands military action, you know the world has changed.

It’s been a rough week for the purveyor of humanitarian relief. First there was the kerfuffle in The Ukraine where Vladimir told the white crosses to move it or lose it. Then yesterday a Red Cross ambulance in northern Kenya was attacked and destroyed, its occupants barely escaping with their lives.

It didn’t take Kenyan Red Cross officials long to then demand that President Kenyatta send in the army.

Gullet was referring to a June 25 pledge by the Kenyan president to send in the Army if the tribal groups in this part of northeastern Kenya didn’t stop fighting.

What’s happening in around this far northern city of Mandera in Kenya is exactly what’s happening in many places in the world, like Pakistan and Myanmar, when hostile ethnic groups get their hands on heavy weapons.

How do they get the weapons?

Don’t make me laugh. Watch Nicholas Cage in Lord of War. It’s cheaper and easier to buy an AK47 in Mandera, Kenya, than it is to buy a sack of potatoes.

And after you’ve killed enough merchants and collected enough coins, just hop over the Somali or Ethiopian border for the Labor Day Sale of grenade launchers.

Soon everyone is killing everyone. Kill or get killed.

Those groups most successful attract the attention of stronger military powers. They make the first compromises of their lives, to join forces however temporarily with other similar groups, and they become the new terrorist threat in the region.

From time immemorial ethnic rivalries existed worldwide and were violent. Development and education ameliorates the hatred and bloodshed subsides when productive work develops.

Slow development is often worse than no development at all. People’s hopes are raised then dashed.

This is northern Kenya in a nutshell. It is much of the rest of the world, too.

“Our mission is to work with vigor and compassion … to prevent and alleviate human suffering and save lives of the most vulnerable,” the Kenyan Red Cross charter says.

So… stand your ground boys, then fire!!