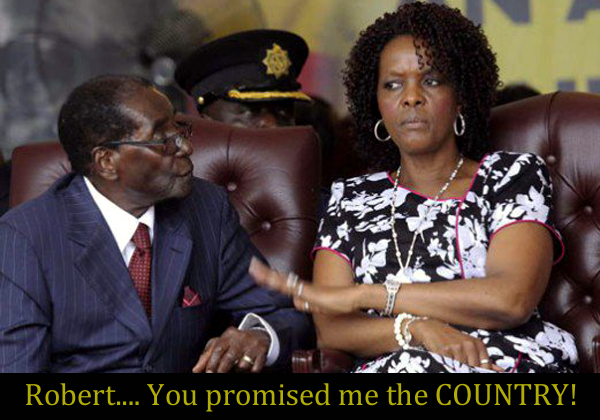 Summer is coming with a vengeance to Zimbabwe. The sky builds with rain.

Only ten days after the fall of Mugabe Zimbabwe trembles. The new regime born mostly of the old vies with long-suppressed and long-stoked groups each ready to kill one another.

First indications are that the new president, the former vice president and close double-crossed Mugabe confidante, is having a very hard time.

To begin with the old man Mugabe was given a golden parachute the likes of which Africa has never seen: An announced $10 million cash settlement but sweetened with the continuation of his normal salary, which was never known for good reason. Plus he’s been given wide latitude to undertake his business outside any regulations by law. He’s already milking what’s left of national coffers.

The recent photo attached this blog has gone viral. It shows the country’s other problem: Mugabe’s much younger wife, Grace. Everyone knows she tolerated the old man for decades for only one reason: to succeed him as president.

Instead Grace has been sidelined by the Army. It was clear about a month ago that Mugabe was about to transfer power to Grace. His first move was to exile his long-time Vice President and bosom buddy, Emerson Mnangagwa, who had fought side-by-side with him from the earliest days of the civil war in the 1970s.

But the Army “intervened” (carefully denying there was a coup) by taking over all the tentacles of government, putting Mugabe under house arrest and shortly thereafter calling Mnangagwa back as President.

Initially there was widespread public approval as you can well imagine. This was the first time in 37 years that anything had happened that Mugabe didn’t personally order. It was technically the end of the dictator.

But that’s not yet the end of the dictatorship.

So far Mnangagwa has placed in power at the same echelons of government the same sorts of people who were there before, mostly Army officers. Delicately, though, he has left open the highest of those places after himself, the vice presidency.

At the same time he’s begun liberalizing the economy ever so slightly, reversing some aged Mugabe prescriptions regarding foreign investment, for example. He publicly declared he was going to take the country into a “new and unfolding democracy.”

So far he’s been much more transparent than Mugabe ever was. These are definitely progressive moves in a country that for two generations was locked up in a box.

But two generations of patience is being tested: the public is rumbling.

“War Veterans” – which is a curiously large group of supposed guerilla freedom fighters from the 1970s – are demanding new power. Former opposition political groups are disintegrating since they were never effective and often existed at Mugabe’s pleasure.

Lone actors grow disproportionately powerful. What’s left in the treasury is controlled by the Central Bank, and officers in that bank over the weekend took the bold move to freeze the accounts of old players in Mugabe’s regime, several who remain very powerful today. The fact that it’s not clear this was an order from above is enough evidence that “above” is nowhere near as centralized as during the reign of Mugabe.

There’s an African proverb that an old hut that cracks in the dry season will wash away with the next rains. The end of one leader’s autocratic regime is often quietly replaced with a carbon copy, or else it dissolves in chaos. There doesn’t seem to be anything in between.