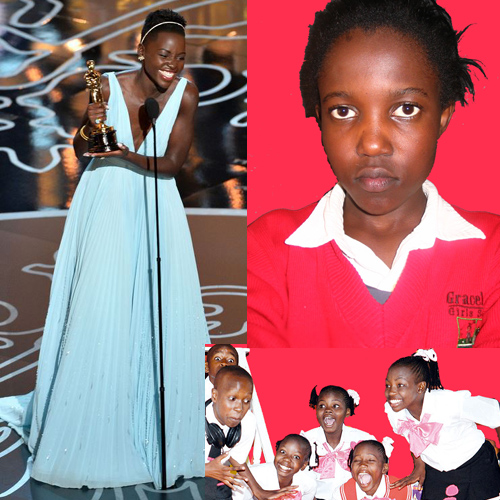 Many celebrities like Leonardo DiCaprio don’t have an Oscar, a jubilant Nairobi commentator wrote today, “It is therefore a big achievement for a first timer to win!”

It’s very Kenyan to savor the moment before it happens. In a world with so much defeat, the simple possibility of success carries extraordinary joy.

President Uhuru Kenyatta wrote, “I hope that Lupita wins the recognition that she so richly deserves… I also believe that the fact that Lupita is where she is today is already a massively gratifying milestone.”

Many in Kenya were on their way to work. The sun was just rising in western Lou where Lupita’s family is from when the award was announced.

Another Kenyan commentator filled with hope wrote Sunday, “The first time it happened in India, when Slumdog Millionaire won, or when the South African film, Tsotsi, achieved the same feat, the success appeared to be dreams made in another world… Now, Kenya could have its moment of glory too if the gods of creativity and achievement smile on Lupita.”

But they are dreams made in another world.

Lupita, as she will now forever be referred to rather than by her surname in Kenya, was born in Mexico when her very politically powerful father was a visiting professor in Mexico City.

Later he would rise to several cabinet positions in the government and like virtually every politician that has ever succeeded in Kenya, become quite rich. Lupita attended privileged private schools in Nairobi and had the resources to succeed abroad.

Her Yale education in the performing arts was instrumental in her later film career.

The rags to riches story doesn’t apply. Jared Leto and even Cate Blanchett are better nominees for that category.

But Kenya and so much of Africa is sustained on hope, and the only thing that’s wrong with that is that it comes so cheaply. Lupita’s talent is undenied. Financial and social resources can take an artist just so far, and she’s made the jump.

She’s proved that a trajectory to success in America, anyway, can all be wrapped into a single lifetime. And that is most Kenyans’ greatest inspiration, today.