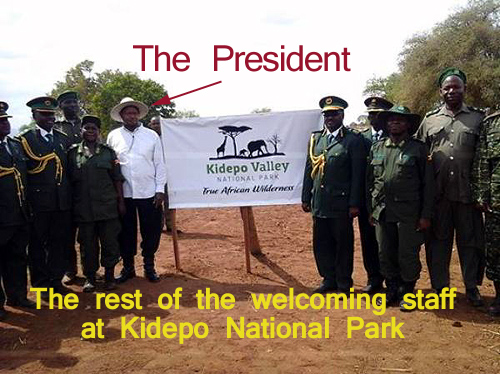 A groundswell of travel professionals, media publications and not-for-profits is moving in the direction of an all-out boycott of Uganda tourism. It’s happening so fast that even nimble dictator Yoweri Museveni has been caught off guard.

Yesterday he visited one of Uganda’s national parks, decimated recently by elephant poaching. Typical of a man under increasing siege, he lashed out at the “Turkanas of Kenya” and the “Toposas of South Sudan” for exterminating the reasons that tourists come to his country.

“Anybody who enters Uganda with a gun must be shot,” Museveni shouted. Later he issued a directive to the parks service and the military authorizing shoot-to-kill anyone suspected of poaching.

Obviously the elephant poaching problem is not confined to one country’s nationals or another. There are just as many reasons Ugandans would poach as Kenyans or South Sudanese. Museveni is feeling the diplomatic and traveler pinch beginning that could destroy his economy, but foreigners really have no choice, now, but not to visit Uganda.

Under Uganda’s new laws a casual reference to “gay” can technically put you behind bars.

Moreover if uttered in the presence of Ugandans, wittingly or not, those Ugandans are suddenly in a dangerously compromised situation: The law requires that they snitch on you, and if they don’t and it’s later presumed they could have, they too can be jailed.

Of course it remains to be seen how seriously these laws will be enforced, but based on the horrible rhetoric exchanged between Uganda and the west over the weekend, there’s every reason to fear the worst.

Simply put, vacation travelers don’t need the worry that they might say something that would put them or their Ugandan help staff in jail.

A safari is an exciting and intense experience, and rarely are tourists not in the presence of local Ugandans. The driver/guide is an Ugandan. The staff in the lodges is Ugandan, and that means meal service and bellhops among many others.

Rangers and other park authorities are Ugandan.

Shop owners, roadside hawkers, other local tourists are all Ugandans.

Under the law if your conversation mentions LGBT, homosexuality or gayness in any form or in any context, you are to be reported to authorities, the authorities are supposed to arrest you and interrogate you.

I remember well the Cold War days when we instructed all of our travelers visiting places then as controversial as South Africa or Burma, never to mention politics. That was hard.

But this goes further. Ugandans supporting the dictator Museveni are loaded for bear. Their pride has been damaged, their integrity challenged by Obama. Museveni as I said Friday is setting up a David & Goliath situation and casting himself as the moral David.

The anti-gay law was not the only axe to fall. Other laws, including an so-called anti-pornography law have now created what amounts to a dress code in Uganda.

The confusing legislation has led to multiple incidents of women in particular being beaten on the streets of Kampala.

So must the tourist conform as well?

Travel Weekly, an industry standard for travel agents for nearly last half century, dared to suggest yesterday that it would call for the first boycott of travel ever against a specific country:

Travel Weekly executive Arnie Weissman recounted his own interview last year with the Ugandan president who told him “he would not sign legislation that carried stiff penalties.’”

Weissman emphasized that Travel Weekly has never called for a travel boycott anywhere.

Now, however, the journal will call for a boycott if gays in Uganda ask it to.

It’s not at all clear, though, they would dare. That alone could get them jail for life.