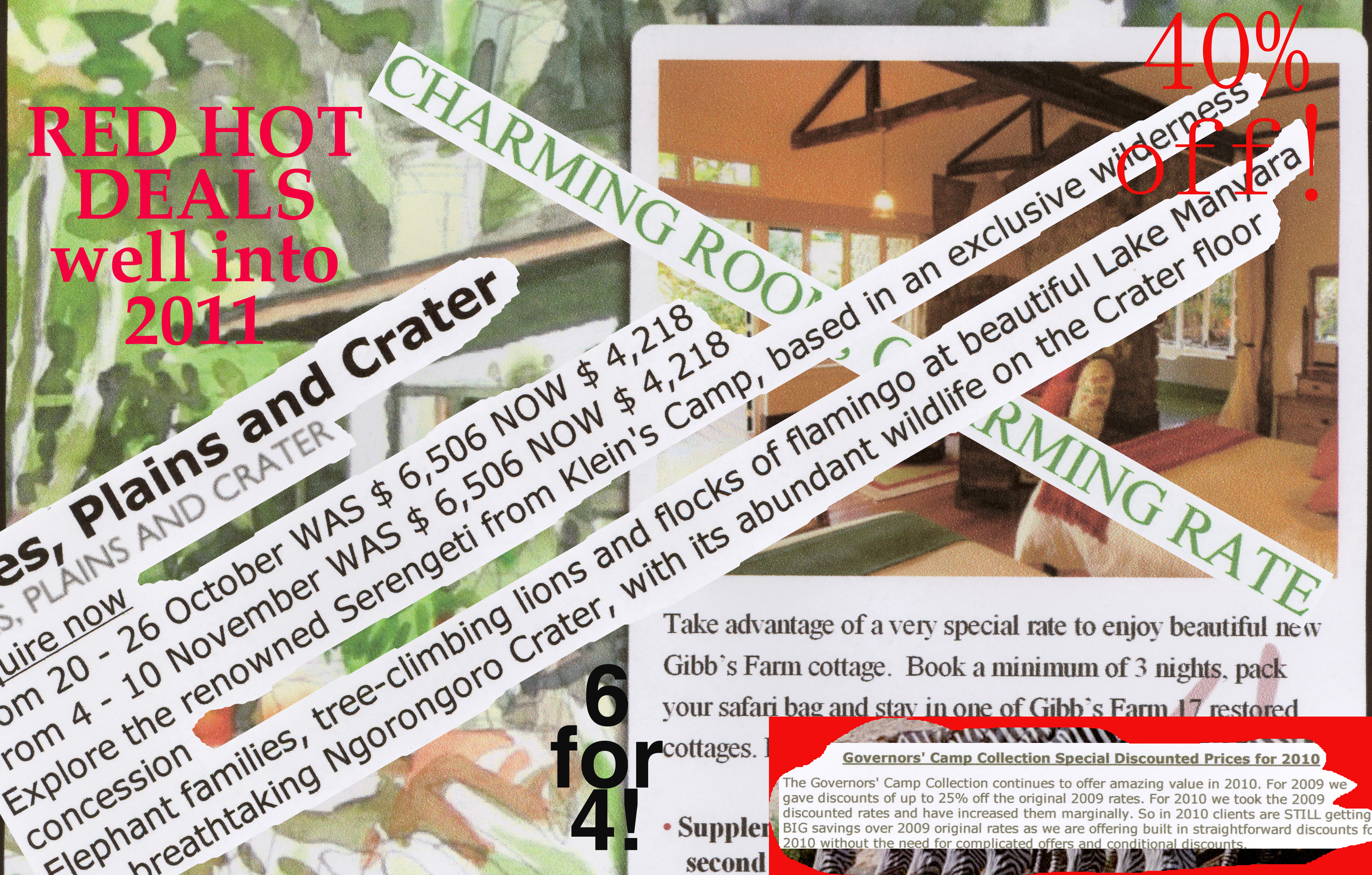 The weather’s been unusually rainy, but I can see through the mist to a 2011 landscape with fewer tourists on safari.

As we approach the most important annual conference for African tour companies in London next month, the news is leaking. Competition is fierce.

Budget travel has been all but wiped out. Midlevel travel is in fierce competition with a major decline in prices, and upmarket travel is contracting capacity and not increasing prices.

For the prospective traveler it looks good on two counts: (1) there will be fewer tourists, and (2) prices are stable or dropping.

For the local African tourism company, there’s going to be a lot of rolling up the sleeves and hard work. I predict more closures, merges and partnerships and a workforce that is likely to contract by another 5% before it bottoms out late next year.

The surge of travel that followed the technical end of an economic downturn is over, and vendors see this from slim forward bookings. By June of this year vendors had noticed a pullback in December holiday bookings, and pretty grim pickings for the start of the year.

This is an economic cycle at its perfection. When travelers realized the earth wasn’t coming to an end last year, those who had waited up to two years to travel all came at the same time. That’s now over, and the market is readjusting to levels that will be here for years to come.

Germany is an important source of foreign tourists to East Africa, and the German economy is doing well. So companies specializing in tourists from this area of north central Europe might even expand next year.

The other source of a smile is the coast. Sun ‘n sand holiday makers from Europe have replenished the Indian Ocean beaches. Charters were pretty full this past season and will likely stay that way next. Africa’s coast is now a nearly completely matured market that can rival coastal holidays almost anywhere else in the world, and so the value particularly for Europeans is pronounced. It’s a wonderful success story. Now, all we have to make sure is that security that Kenya and Tanzanian can provide will do the trick.

But as far as I can tell, Germany’s momentary economy strength and the East African coast are the only two positive signs in a year which otherwise looks very weak and pretty miserable.

Southern Africa’s ridiculously high exchange rates – a result of the world’s reliance on basic resources like gold in an economic downturn – are keeping prices for everything, including tourism products, ridiculously high and this will continue to depress that market.

Often budget travel does well in an economic downturn, but the problem this time is that the younger traveler no longer exists, the Asian traveler which flooded the market last year has stabilized and is decreasing, and all that’s left are pensioners with an increasing concern about their financial future.

And that’s where the stiffest competition will be next year: The midmarket. It’s where potential travelers will find the best values and where investors will have the most headaches.

The upmarket was the hardest hit when the economic downturn began in 2008, it rebounded the most in 2009, increased a wee bit again this year, and will take the hardest hit next year because its rebound was so high relative to the overall market. Although where it ends up as 2011 will be remarkably close to where it was in 2009.

The volatility of the upmarket is a result of its small size and ability to price quickly depending upon market trends. So with alarming speed &Beyond published incredible deals in early 2009, ended them with the same alacrity in 2010, and is now presenting them again for 2011.

&Beyond is the only transnational company throughout sub-Saharan and southern Africa, and so it has its feet solidly in two different mud pools. One might be sinking while the other is firm. It’s always a good company to look at for comparisons. Right now &Beyond’s pricing is getting much more aggressive in east than southern Africa, I think because of presumptions that Zimbabwe might be coming back on line and a recognition that the East African market for upmarket travel is cooling.

I’ll revisit all these general predictions with hard numbers after the November convention.