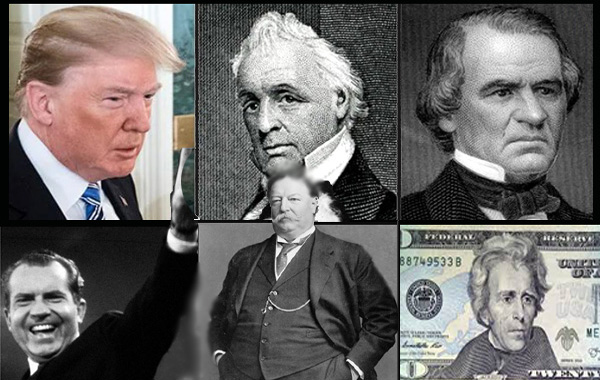 Some of us took advantage of the one-two punch of Trump + Pandemic. With alternate mixtures of anger, depression and irresolvable feelings of capture we were motivated to learn a little bit about past U.S. pandemics and presidents.

My fascination with early man never reached the point of exchanging empathy with an Australopithecine, but boy do I feel brotherly closeness to the Republican reconstructionists and Boston priests and doctors conscripted for forced vaccinations! With a longer view of America than one lifetime there’s no democracy among angels. It’s been a sludge fest the whole way.

Today is President’s Day in America. All countries have holidays to celebrate their CEOs. Listen, if you neglect giving your boss a present for his birthday you’ve set your next bonus in the wrong direction.

The fact is that American presidents are mostly either awful or ineffectual. A couple charismatic characters seemed to have achieved exception with heavy reliance on their looks or oratory, or because the backwards construct of history needed a hero.

American presidents – powerful in the context of overall American power – are incredibly constrained by the other equally wacky arms of our Tripartite: the bawdy legislature and the intoxicated Supreme Court.

History has proved that any notion that these water-and-oil mixtures produce some pure brand of fairness is absurd. That doesn’t mean it’s not among the better social concoctions on earth. But it’s precisely the belief – or maybe hope is a better word – that American democracy is best that keeps it from getting better.

The two can’t seem to mix in the modern, high tech fast moving world. Compromise is like a Mitch McConnell smile, very rare and too tiny to see because he’s got such a small mouth. So our current often violent dilemma is about which prevails on any given issue, human rights or individualism.

Frankly as an old man I’d like a bit more peace. My wife is Canadian so our attentions turned increasingly towards the St. Lawrence as a respite to retire. Until the idiocy of individualism synced with a Mack Truck.

But let’s get one thing right. With the vast, vast majority of intricate controversies resolution rarely achieves the right side or the wrong side, just a practical side. And we should be grateful for that.

But for society as a whole over the course of history, the social forces that elected our hallowed presidents are now definitely seen as from the right side or the wrong side. The sides might have been complex, built of many less clearer parts, but in the end violence was wrong and truth was never a lie. That’s the problem with an election outcome: you’ve got to distill complexity into simplicity, right and wrong.

Then you let time pass and “right” and “wrong” get toned down, integrated, maybe even turned into productive legislation. Can’t seem to do that, today. There’s not a big enough interval between tweets.

And it seems to me individualism on The Right and human rights on The Left will never the twain meet. Nobody will hazard enough time to do so. And it also seems to me that individualism will collapse this modern world of ours. Human rights isn’t as heady. More sustainable.

The wrong side, the individualists have already managed to squeeze most learning out of their heads. So forgive them for lacking the intelligence to be cognizant of their disregard of human rights. Their idea of regulating a society tops out with the rule book for a six-man Blackjack game.

And surprise, the collective voting by millions and millions in the last election was the human rights that ensured obscured individuals were not disenfranchised.

Get that? The right side ensured the wrong side! Too bad it doesn’t work the other way round.

So today I’m relaxing with an extra cup of tea. Decaffeinated.