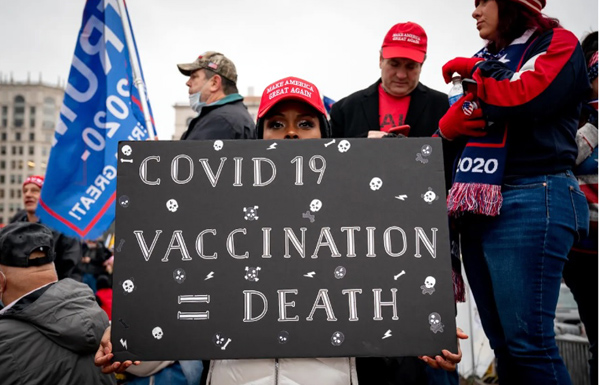 Is naming anti-vaxxers who die of Covid a moral strategy for promoting vaccination?

The “Death Shaming” controversy is on big time. It’s on because Delta is mowing down those who flaunt it, and it’s on because the madness that denies vaccine science can just as readily deny the anti-vaxxer’s obits.

Fact: There are a lot of anti-vaxxer celebrities, social media and talk show hosts who have died of Covid:

(So you already know what I think about “death shaming.” Hold that thought.)

Let me repeat: there are more fools in America than Kenya.

Clapton, who recently teamed up with Sen. Ted Cruz on Twitter to denounce vaccinations, represents “decades of vileness that have been overlooked or rationalized,” the article continues.

The craziness of anti-vaxxers prompted Kenya’s main radio network to publish warnings from the screenwriter of the 2007 zombie movie, I Am Legend:

That isn’t to say there aren’t anti-vaxxers in Kenya and other less developed countries, and for the same reason that we’ll never achieve the confidence in case and death numbers from the disease from Kenya, perhaps we’ll overlook some of the anti-vaxxers.

But my survey suggests as you run up the ladder of development, there’s more and more anti-vaxxing.

Kenya is a modern, rapidly developing but still poor country. Next door Uganda is worse off, and Uganda has always been considered the voodoo country in the region, despite highly educated urban Kampala. I couldn’t find a single anti-vaxxing message, but lots of anti-anti-vaxxing messages in Ugandan media.

But running up the ladder of development to Nigeria, then some begin to show. And when you scale to the top, South Africa, the anti-vaxxing movement is probably just as strong as in America.

I think there’s two reasons for this.

First is simply technical. Anti-vaxxing, like science-denial and vampire hunting is sustained by a robust and very modern social media.

The “Disinformation Dozen” – a list of America’s top promoters of anti-vaxxing – wouldn’t exist without social media, even though many of their platforms start with traditional radio. They’re mostly heard through phone apps and amplified not by turning nobs but retweeting urls.

Modern hand-held smart phones capable of accessing this media exist worldwide, but they’re expensive and the mobile services charge high rates for data put-through. So if you’re rich enough to get a smartphone, you’re probably educated enough to realize it’s stupid to pay for stupidity.

Even a rich person in Kenya is usually more socially conscious than their counterpart in America. There’s a first-principal understanding here that those who got a lot will keep a lot.

The selfish indulge their idiots. Because they can afford to. They got a lot. And they’re going to keep a lot. Just in case? Who’s more shameful, now?