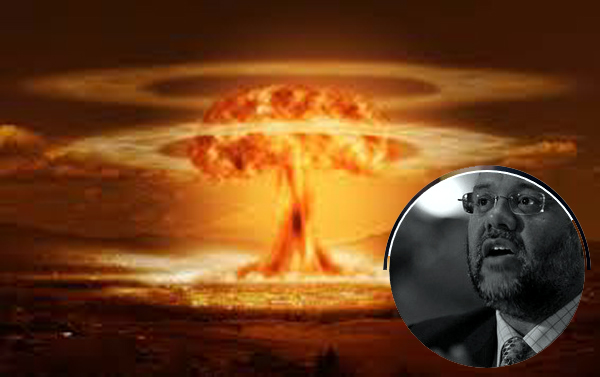 The “American nation [is] complicit in the demise of its own democratic well-being,” writes South African Ebrahim Rasool today.

There’s a sense in the American progressive media that the worst may be over, that Mueller’s investigation heralds an imminent victory, and that it’s time to get off the streets and begin electing those midterm Democrats. Rasool disagrees: Extremists in the west have harnessed “the power of the state… to unleash its dread on people … and sanctioning, if not fomenting, war.”

Rasool is not talking about the Syrian civil war. The war he fears is global. Dare we call it the nuclear apocalypse? A few more Democrats in The House isn’t going to stop it.

Many scholars have documented Americans drifting into a populist era, but few that have articulated as well as Rasool how this has actually gone dangerously further.

Ebrahim Rasool is uniquely qualified to let America know what bad shape it’s in. He’s a former premier of South Africa and chairperson of the ANC so he has intimate experience with “Trumpism” in the former “Zumaism.”

He’s also served as South Africa’s Ambassador to the USA, and he’s currently a Senior Fellow at Georgetown University.

Rasool sees much of the world going through a populist revolt. Common to everyone on the planet is the discontent caused by the technological and information revolutions. In many societies including America there is discontent over income inequality. Extremely poignant discontent over gender inequality exists today in Asia.

Populism emerges from discontent that goes unaddressed for a long period of time.

Rasool understands that populism itself is not dangerous. He points to the populist movement of America in the 1890s that led to the controls of banks and first constraints on monopolies.

But if the populism is unable to create policies that alter that discontent, it becomes extremism.

Americans’ discontent with various inequalities (like income disparities) and the emergence of new power centers (like Latinos) displacing age-old institutions (like white political parties) has resulted in our populism. The populist option was Sanders or Trump. Trump has so far been unable to fashion any remedies for the discontent.

Extremism, according to Rasool, is when the State “unleashes its dread on people through travel bans, dismantling social security, deepening surveillance, and sanctioning, if not fomenting, war,” and “Clearly this is beginning to happen in the West.”

“The malignancy in populism” comes in the absence of any clearly culpable person or group. Who are we going to blame for income inequality? Our grandparents for voting to create a Federal Reserve?

That’s the scary thing, today. The discontent has no easy explanation. No, it wasn’t our grandparents, it wasn’t Teddy Roosevelt or Ronald Reagan or the Tea Party. It’s much more complicated than that. Blame is spread out not among individuals, perhaps not even among generations, but among many organic social constructs that may be flawed.

It’s very frustrating not to be able to point a figure at someone to blame, but it’s a frustration that modern societies must suffer if they are to endure. The inability to accept this psychic pain sends populism into extremism.

“At the heart of this process is a deep anti-intellectualism…The suspension of reason and the excess of presumed moral self-righteousness allow the assumptions of the populist to remain free of scrutiny and interrogation.”

(This, I suggest, is a direct result of America’s defunding education for two or three generations.)

“Malignant populism…leads to the identification of an enemy – that group is to blame; the enemy must then be demonised and otherised; they are all the same bad people.”

Rasool is no less critical of the Left than the Right. Both, he believes, are trying to harness the populism in immoral and unethical ways:

“In this scrutiny-free zone, the stereotype will remain supreme: all Muslims are terrorists and all whites are robber barons.

“In these lie the seeds whereby the greater good is sacrificed at the altar of sectional, often identity-based, interests; and the pursuit of justice and equity get lost in the maze of identity politics. It is in the politics of blame and complain… that emerges a leader more befitting of a cult than a party.”

Of course I wish it had been Sanders instead of Trump and I know it could have been.

I don’t agree entirely with Rasool. Sanders would have been better, more compassionate and less divisive than Trump, and I think he could have pulled it off. But take note from a man who has lived an experience beyond Trumpism as South Africa finally emerges into civility in their politics, again, and has the advantage of hindsight.

One thing I think is certain. Moderation won’t work. A few more Dems increasing a few more Medicaid programs in a few more States will only prolong the psychic pain that will ultimately truly erupt as Rasool suggests. That we don’t want.

One thing is certain. Moderation won’t work. Only something radical will stop the war.