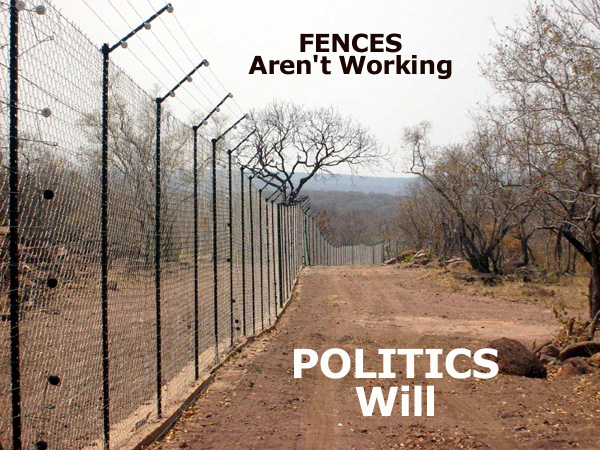 In this upended world even long-standing beliefs about extinction are being contested by a public ready to do anything so long as it’s different.

Rhino haven’t survived in the wild for decades, but since the 1980s they’ve been so well protected in fenced reserves that their numbers actually increased. That’s changing: Poaching inside fences is exploding, courts are freeing poachers, breeders are defying international bans and regimes like Trump’s are rescinding years of safeguards.

The 139th rhino shot in South Africa Sunday night lived in a fenced reserve that is one of the most successful in the world, Hluhluwe. This follows last month’s prolonged shoot-out lost by rangers that killed a mother rhino and her baby.

The twin reserves Hluhluwe and Umfolozi were instrumental in raising the white rhino population from a mere hundred, one hundred years ago, to nearly 20,000 at the turn of this millennia.

But since the start of this decade, the population increases reversed because of poaching. There are now fewer than 15,000 left. A quarter of the population that took a century to established has been erased in less than a decade.

This resurgence in poaching is not taking place in the wild as such. Nor is it anything akin to a zoo. More and more wild animals in Africa are being confined to fenced-in reserves. These are still massive areas of mostly unmanaged wilderness. Hluhluwe-Umfolozi is 370 sq. miles. Other similarly fenced reserves like Kenya’s Nakuru, Aberdare and Ol Pejeta reflect the necessities of our rapidly modernizing world.

The protection is not just for the animals. The private fund raising that produced Kenya’s Aberdare fencing came mostly from farmers. I don’t see how we can argue against this.

What is so striking, however, is the sophistication of poachers who must navigate the “fence.” There is usually much more than just a wire barrier. There is that, but also electrified subfences, moats, even CCTV.

There’s only two ways to poach from within these wild fortresses: hi-tech including sophisticated killing devices, or an ‘inside job’ as was so famously documented in South Africa last year.

But it seems to be worth it from a criminal’s point of view. Just as the shrinking of ISIS provoked more deadly suicide attacks, the tightening of restrictions on the sale of rhino products provoked a more lucrative demand.

This unfortunate but rational dynamic is now being exacerbated by the craziness of our times.

Last month a South African judge released on $1500 bail three poachers who had actually been filmed poaching! The legal technicality trumped the certainty of their conviction, or at least so decided the judge. Most observers do not expect them to remain around for the trial.

Another South African court ruling paved the way for rhino breeders to begin online auctions of rhino horn and other body parts August 21.

China has outwardly done much to suppress the trade in endangered species since its 1993 ban on two of the most prized items in traditional Chinese medicine, tiger bones and rhino horns. The government then aggressively promoted standard pharmaceuticals as substitutes.

But among China’s aging population it hasn’t worked. Chinese lawmakers began funding local domestic farms of rhino and tiger and permitted them to sell into the traditional medicine market.

“If in the future original products from wild animals are all substituted, our Chinese medicine perhaps won’t be of any use anymore. This issue needs to be discussed by us Chinese people,” Zhai Yong who heads parliament’s relevant committees told the press.

So on the demand side reversals are taking place: hard-won policy in the last half century is being reversed.

And on the supply side reversals are taking place as well: Restrictions on sale and aggressive prosecutions are being reduced.

Massive relevant budget cuts, ending protection on parrots and a score of other animals, and even suggestions the U.S. will pull out of the CITES treaty represent the Trump administration’s part in this backwards march.

No rational mind can support these reversals. Aspirin works better than ground tiger horn. Biodiversity preserves earth better than any other technique.

But modern medicine and simple science – which only a few decades or so ago were being embraced by all – are now being lumped together with the modern failures of politics and government.

“Animal issues” are sensitive but we need to understand they are only a small part of a much more fundamental social angst. No targeted remedy is going to work. It’s the whole ball game, folks.