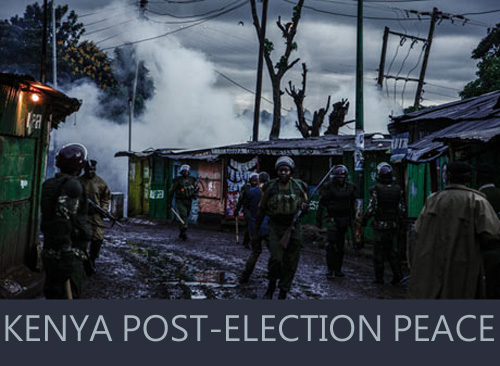 Only a couple violent incidents following Saturday’s court decision upholding Kenya’s election. Peace is predicted, specifically because the architects and instigators of the deadly violence following the 2007/2008 elections are now the country’s president and vice-president.

Uhuru Kenyatta is the country’s new president. William Ruto is vice president. The two are indicted for crimes against humanity. Whether it be the poor judgment of Kenyan voters or its manipulation by evil leaders, doesn’t really matter anymore. It’s done.

Five years ago when 1300 people were killed and nearly a half million displaced (a quarter of which remain so) Kenyatta and Ruto according to the World Court indictment used their vast fortunes and complex communication network to organize thugs and criminals to kill and terrorize.

They no longer command thugs and criminals. Today, they command the Kenyan army.

A generation or more of Kenya’s social progress has been lost.

It’s the ultimate prerogative of democracy to install in power those who should not be: To make liars, cheaters, crooks and even murderers Heads of State. And in this case in Kenya, I honestly believe as did its exemplary Supreme Court, that if not the majority at least the plurality of Kenyan voters truly wanted this outcome.

And the insult to righteousness is that not even a tiny minority of Kenyans ought to have voted for Uhuru Kenyatta. Kenyatta is the richest man in East Africa, now the 4th president of Kenya and son of the first, and one of six unique Kenya individuals indicted by the World Court for crimes against humanity.

On April 9 he becomes the second sitting African Head of State (after Omar al-Bashir of The Sudan) to be on trial for the gravest sins against his fellow men.

How could Kenyans have elected him?

There are two widely accepted reasons. The first is Kenya’s horrid tribalism, which perhaps I wrongly thought its youth had all but discarded. Kikuyu Kenyatta’s chief rival in this election was Raila Odinga, a Luo from western Kenya.

The Kikuyu and Luo are the arch enemies that define Kenya tribalism. It was Raila’s father, Oginga Odinga, and Kenyatta’s father, Jomo Kenyatta, who fought one another in the bush then in Parliament to be the first to rule an independent Kenya. Jomo prevailed then jailed Oginga.

That was a half century ago. Most of us simply could not believe that the last half century of human development in Kenya, which outperformed all historical standards, would not produce a new generation of Kenyans who would emerge from these hateful trapping of tribalism.

Now nothing seems to have changed. Each tribe so fears the other that they will do anything to achieve power over the other. There are more than 40 tribes in Kenya, and Uhuru’s deft manipulation of democracy in this exercise was to choose his vice president from a third tribe that ensured a solid plurality against the Luo.

It mattered little that his choice was one of the most evil and corrupt men in Kenya, William Ruto, a fellow indicted by The Hague as well. The Kikuyu Kenyatta/Kalenjin Ruto team, bedeviled as historical enemies nevertheless controlled the numbers, and the numbers make democracy.

The second reason seems less likely to me, but Kenyan analysts seem sure of it:

There may have been a popular backlash against the World Court’s indictments and of western nations’ not so subtle messages to Kenya that they better not elect a criminal.

The U.S. was particularly blunt: Obama said he hoped Kenyatta wouldn’t win. The U.K. – Kenya’s national mother and principal benefactor – said it would not allow Kenyatta or Ruto to visit Britain. (Both have now congratulated the new leaders.)

I may be just as naive about this as I was about the presumption that tribalism was water over the dam, but frankly the Kenyans I know are heartsick with the outcome. These are Kenyans that are young, well educated and truly a rainbow of tribes.

But like the courageous kids who started the revolution in Egypt, or the intellectuals who thought they crafted the New South Africa, or any of the bloodied stakeholders dedicated to good change in places like Tunisia much less Russia or Broward County, democracy has a wicked way of exploiting change by crushing it.

Revolution is no certain remedy. And democracy is often little more than a facilitator for the evil that provokes revolution in the first place.

Kenya’s new constitution, its youthful society and progressive economy, is 100% 21st century. This election is the failure of that new generation to manifest itself, take control. It is a government of a society of the 1960s.

Kenyatta’s government will be in power for at least the five years given it by the new constitution. But some think it’s in for the generations that were just lost.