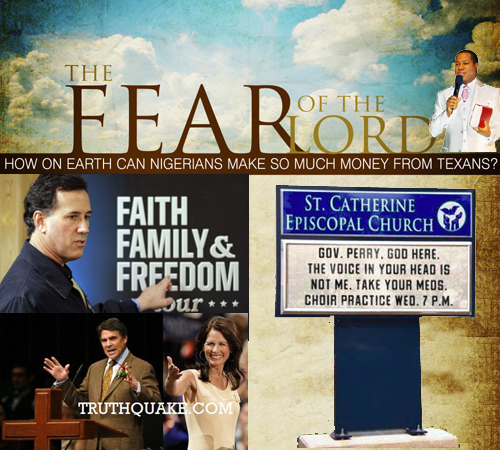 Evangelical preachers have long been on the list of greatest scam artists but five Nigerians with active churches in the U.S. take the cake!

Two with special attachments to Texas and other blind congregations that vote against their medicare benefits, hate blacks and throw the last bits of money they have at these jokers, are David Oyedepo and Chris Oyakhilome.

They’ve most recently been ensnared in a loud African debate over why so many pastors own private jets.

Forbes estimates Oyedepo’s worth at $150 million and Oyakhilome’s at $30-50 million. Oyakhilome actually has a greater presence in the U.S. than Oyedepo and it totally befuddles me that people will write him checks.

Oyakhilome runs Christ Embassy. There are a number of affiliate churches in the U.S., many in Texas and almost all of them in the south, and many directed to American youth on college campuses.

“Oyakhilome’s diversified interests include newspapers, magazines, a local television station, a record label, satellite TV, hotels and extensive real estate. His Loveworld TV Network is the first Christian network to broadcast from Africa to the rest of the world on a 24 hour basis,“ Forbes revealed.

His regular “rivals” throughout America’s south garner millions and millions.

He recently plead no-contest to a $35 million money laundering scheme that siphoned cash from his network of churches into foreign bank accounts. The individual stories are beyond laughable. It’s absolutely incredulous that people believe him.

Take the most recent $5000 “disappearance” of church cash which he tries to pin on another jet-setting millionaire Nigerian pastor, Chris Okotie. (Forbes says Okotie’s estimated worth approaches $10 million. Guess that’s not enough.)

Why do so many people, in Africa and in the U.S., supports these crooks?

The question is really not so different from why do these same people vote against their own self-interest, deny that Obama was born in the U.S., disbelieve global warming and think evolution is a plot by bad men to deny the existence of god.

So it’s a fun exercise in exasperation, but there’s little to do about it. It isn’t as if these guys aren’t exposed. They’re exposed in all sorts of publications, and not just headliners in Forbes. The good Nigerian press is constantly on them.

But the attempt to unmask them is the very stuff they use to build their support. There is such distrust in the world of our given institutions, like government and the media, that clever artisans can twist allegations into alleged lies and be believed.

So I suppose in the end we are responsible. We’re responsible for allowing our established institutions to degrade to this point, and to having neglected social education to the point that good people are unable to see the obvious fraud for themselves.

I think Africans are awakening compared to Texans, though, and it may be why so many of them are redirecting their efforts here, out of Africa.

Why are Africans awakening and the citizens of Houston aren’t?

Send me your answers. Make them brief.