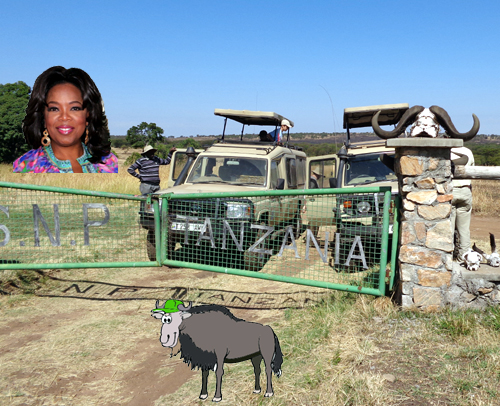 Oprah Winfrey’s just completed her Tanzania safari, but she was on the wrong side of the river: the migration is in Kenya.

If Oprah can get it wrong, I suppose I shouldn’t be so upset that so many people get it wrong. And then, again, we don’t really know Oprah’s motivation for her very short 7-day safari, or why she chose Tanzania. Maybe she shares my politics and is critical of the Kenyan regime.

But it is migration season in Kenya, to be sure. And if you’re on the wrong side of the border, today, you’re out of luck.

Lots of photographs on Twitter and Facebook of the migration, today, crossing and recrossing the Mara river in Kenya. This really is the culmination of the migration, the furthest north they can go, the last good bits of grass before the whole region dries up by October.

A nonsensical straight line divides the unique Mara/Serengeti/Ngorongoro ecosystem into mostly Tanzania and bit of Kenya. And this bit of Kenya, the top of the ecosystem, is where the migration is today.

About four weeks ago I was in northern Tanzania where Oprah went to see the migration last week, and we saw the final bits of it as it was crossing into Kenya. It was a truly magnificent site, and we had made the long trek from Seronera (a 12-hour day) knowing that we might be too late.

From the Balagonjwe gate west and north to the Mara and Sand Rivers was pretty solid wildebeest. This is about a five-mile corridor along the border. The rangers said there were still plenty of wildebeest south and west of here, over ragged hills that had no tracks, so there was no way to confirm this.

But from the slopes where we ate lunch we could see well into Kenya. We were just west of the Mara River Bridge and could see carpets of wildebeest already on the Kenyan side.

The family I was guiding knew quite well that the specific dates they had to travel were a bit late for the migration in Tanzania, and they had decided not to go to Kenya for a couple reasons: first, when the trip was being planned, the political situation in Kenya was unresolved.

Second, July is always an iffy month for predicting whether the migration will be in Kenya or Tanzania. I’ve seen the migration cross into Kenya as early as the first week of June, and I’ve waited despairing on the Kenyan side for it to arrive in late July:

Oh for the long gone days (before 1979) when the border was open and you could simply go back and forth truly following the herds.

But not since then has that been possible. The wildebeest we could see on the Kenyan side, perhaps 15 minutes from us as our Landcruiser could have made it through the low Sand River, were actually more than a day away from us.

We would have to fly back to an official Tanzanian border post. The nearest one (by travel time) would be Kilimanjaro airport, and after exiting Tanzania we’d fly to Nairobi, enter Kenya and then fly to the Mara. On scheduled service we could leave the area where we were watching wildebeest around 8 a.m. in the morning and arrive the other side of the river about 5 p.m. that same day for a travel cost of around $700 per person.

The closing of this border in 1979 was the result of a Cold War dispute, really, between then socialist Tanzania and capitalist Kenya. The two countries are the best of friends, today, but Tanzanians worry that the tourist industry they’ve spent the last 35 years building up would be consumed by the bigger capitalists in Kenya.

And frankly, the Kenyans are worried that their drivers and mechanics and pilots wouldn’t be treated very well by the Tanzanians suspicious of their motives.

So as best of friends, the two countries are quite content with keeping the border closed. And not even Oprah has the mojo to crash it.

Only gnu got this mojo, dude.