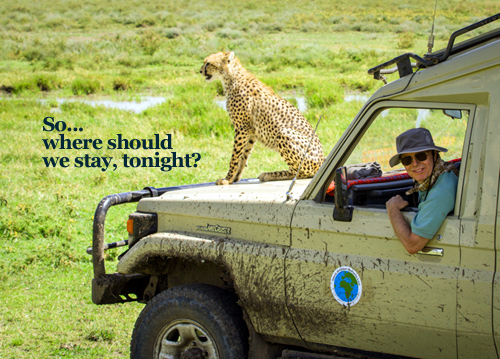 Predicting how you as a consumer or as an investor will successfully choose your properties for the future of safari travel is founded almost entirely on the philosophy of “luxury travel.”

Don’t get ahead of me: I’m not concluding that “luxury” will be the winner, quite to the contrary. But to understand this, you need to first understand what luxury travel has meant for sub-Saharan Africa.

Luxury travelers break down into two categories: those who believe “If you’ve got it, spend it” and who’ve got it; and those who haven’t got it quite as much but want to “treat themselves.”

There are, of course, rich travelers who are eminently practical, too, and who will choose their accommodations after they choose their place. A good example of this is the Serengeti where East Africa’s foremost luxury company, &Beyond built its first two properties in the Serengeti in areas that rarely experience the migration (Grumeti and Klein’s Camp).

Both properties are at the bottom of the company’s performance charts.

But such affluent travelers are rare. That doesn’t mean they don’t exist. I like to think that most of my own affluent clients are more schooled in what they want to see, but for the vast majority of rich travelers, “what” isn’t as important as “how.”

So it was a no-brainer for investors in sub-Saharan Africa over the last two decades, as the world grew more and more divided between rich and poor and the rich became much richer much quicker.

It didn’t matter to these “If you’ve got it, spend it” folks that they would miss the great migration. What mattered was very comfortable beds, good food and service, privacy and space. Of course there had to be animals, but there was little motivation to find the “best game viewing.”

This was a real boon to investors, because many of the choice locales for the best animal viewing had long before been bought by the tried-and-true (Thrun) properties. So this dilemma of not necessarily being able to build in the best place went away.

The other category that considered “treating themselves” during at least part of their safari was attracted by the hoopla associated with the ultra luxury in East Africa, which until it appeared all of a sudden in the late 1990s seemed quite out of context.

I speculate that as many as a third of the those staying at Ngorongoro Crater Lodge do so for the effect, and that likely the rest of the places they stay are much less costly and luxurious.

Crater Lodge has the benefit of being in a good location, too, something unusual for the early luxury properties.

The Great Global Recession aggravated the world’s traveling markets and accentuated the luxury. Luxury travel didn’t really decline much after the initial shocks of 2008. The rest of the markets literally withered up.

But what’s emerging now is quite different from the nineties when use and investment in luxury travel began its prime. Travelers of all market niches are returning to Africa, and the growth is steady and slow just as the economies of the world are growing steadily and slowly.

But the rich market is turning. I know it’s still around, and where it’s going is hard to say. But our anecdotal evidence is that potential safari travelers are much, much more interested in “what” than “how.” And that no matter how rich you might be, value really matters now.

I’ll speculate why. I think we’re headed world-wide for higher taxes and a greater redistribution of wealth, and that will certainly trickle down to travel practices. Second, the older generation of wealthy individuals that supported the investment and use of high-ticket travel is dying. That was also the generation of high rollers in derivatives and other nasty things.

There is some interesting evidence that the luxury companies know this is true.

Wilderness Safaris is an excellent mostly southern African company that basically cornered the market on luxury properties, originally in Botswana and later throughout much of southern Africa.

Last month Wilderness announced it was moving its headquarters from South Africa to Botswana.

The company provided little fanfare with this announcement, and for good reason. There is only reason that any travel company would move from the near-perfect environment of Johannesburg to the only capital city in Africa that has no direct flights from Europe, Gaberone: reduced taxes.

Other up-market companies give us similar indicators. &Beyond is “renovating” Kichwa Tembo in the Mara, which does allow them to champion a million dollar investment. Kichwa was the only non-up market camp in &Beyond’s portfolio, a left-over from its early purchase of Thrun properties from Abercrombie & Kent in the 1990s.

What this means is that &Beyond doesn’t want to conflate the two markets. I suspect they understand the upmarket is shrinking, and that the competition for it will grow more intense. Not a good idea to have a pizza delivered into the kitchen of a gourmet restaurant.

And another wannabe luxury company, Sanctuary Retreats, has just announced a seventh luxury small cruise ship in Myanmar. This means the company which was defined by luxury African lodges will now have more than half as many boats as lodges.

These big, enormously successful companies are doing the right things. They can’t remake themselves into something less for the future, so they are preparing to be more and more competitive for what I think is going to be a diminishing luxury market.

And that means, of course …

… that the Thruns will return. The “thoroughly reliable and unspectacular” properties I wrote about in Thursday’s blog will reemerge, I believe, as the dominant market in safari travel in the next 5-20 years.

A generation of practicality is upon us.