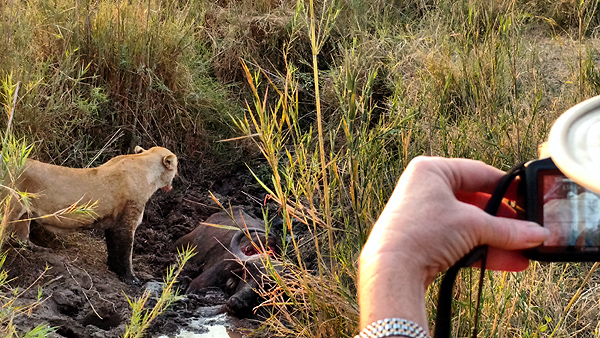 Our car skids a bit on the bend in the red dirt road that’s partly obscured by thick twiggy bushes. My fellow travelers ooh with amazement as the driver slams on the brakes. Cameras click in awe-struck silence at 17 wildebeest and 8 zebra. I feel the most horrible pains of homesickness.

Homesickness is continuous for my wife, dog and home (in that order) but the spears through my soul at that moment were for the Serengeti – for wild Africa. When I see wilde and zebra, it’s generally in the tens of thousands, not 17+8. They blart, bark and kick up their heels just as Peter Matthiessen describes, “Racing around the veld as if to dash their itchy brains on a rock!”

The 17+8 didn’t even raise their heads from placid grazing. It was as if we weren’t there. This is a South African private reserve, among the better, Sabi Sands.

Earth pulsates under the wildlife of East Africa. The struggle for existence is palpable and constantly uncertain. Only when the huge equatorial sun sets behind a line of acacia in the Serengeti might there be some momentary relief from the chaos of the day: Jumping and racing might slow a little so they can catch their breath: They’ve made it through another Africa day alive. Now, there’s the night.

In the first five hours of our first game drive in Sabi Sands we saw the Big Five, often multiple times. Within two days we’d added wild dog and several more rhino, both black and white. We rarely if ever see rhino in East Africa. Wild dog are once again struggling to survive.

It’s just not wild enough for me in South Africa. Don’t mistake me: this isn’t the San Diego Wild Animal Park, but the extreme habituation of the animals and their resultant predictability which generates the camps’ rigid routines just isn’t my cup of tea. It’s another great leap out of the wild.

We saw two lionesses as they killed a buf that was mired in mud trapped in a dying river. We saw four different leopard including one chased up a tree by wild dog. My last visit four weeks ago experienced only a handful of ele but this time there were easily several hundred. There were countless impala everywhere, nyala everywhere usually looking at us, and lots of magnificent kudu.

And lots of other stuff like giraffe, warthog, a couple dying hippo, many hyaena and I’m sure I’ve forgotten important others.

But…? Well, first of all, I certainly mean no disrespect for the organic joy of my wonderful clients and I’ve kept my counsel best I can. But as we leave Sabi Sands and head for the final game reserve on the trip I feel so homesick for East Africa I wonder if I will ever come back here, again.

Very important fact: the Kruger area in particular – including the private reserves like Sabi Sands in which I’ve now spent seven days over two months – is one of the richest biomasses left on earth.

Among other things that means it’s beautiful. Duiker bounce all over the place – we’ve lost most of the duiker in East Africa. Despite the challenges of an extended mini-drought, the ele look pretty healthy. When we suffer droughts (with increasing frequency) in East Africa, game viewing is toast. What few animals left that don’t move far away out of the drought are angry, pitifully sick and dangerous. There are no bore holes to help them as here.

Kruger is the oldest big game national park in Africa. It’s remarkable how well the original biomass has been maintained for more than a hundred years. Since the fence between Kruger and Sabi Sands came down in the 1990s, their ecologies are nearly the same.

But in my estimation the extreme development of South African society at the margins of the parks and the intense human interventions to nurture and regulate the biomass has come at the expense of the animals’ natural spirit:

The cats are tame. One big male leopard was found sleeping on a divan at the pool of our camp. The liquid fear of the much wilder East African leopard that morphs instantly into viciousness is absent from the Kruger cat.

As we bushwacked in pursuit of running wild dog, a lone hyaena followed us the whole way. Hyaena aren’t very smart; their little brain is wholly intuitive. How did he know we’d find the dog? East African hyaena run frightfully from vehicles that tear through the bushveld.

The guides here yell loudly everything they say so that the clients in the back of the car can hear them. In East Africa among thousands more animals, we whisper… when we dare.

But nothing injected deeper sadness into my homesickness as seeing those few, docile wilde. Hey, they’re alive, right? There are massive modern macadamia farms at the edge of Kruger! Jet planes fly into the park’s airport. Skyscrapers are set to pierce the landscapes of the nearby cities of Hazyview and Graskop where thousands of South Africans are becoming the smartest people on earth!

And those wilde are still alive and they seem healthy enough. In 15-20 years the millions of animals in East Africa I truly believe could be gone. In 15-20 years there will still be 17 wildebeest and 8 zebra on most Kruger game drives.

The late afternoon shadows over vast, seemingly endless and ever changing landscapes of East Africa are no different than here. But they seep over the exhaustion of the veld like thick syrup poured over a pancake, powerfully irregular. Then when darkness is complete over the Serengeti a most amazing transformation occurs.

Sometimes in the middle of the night at Ndutu Lodge I walk out onto the verandah and listen in the darkness. A quick crack of bush over there then a dopplered whoosh into oblivion. Distant zebra bark at their young to stay awake. A pair of lion moan by the lake; a skulking leopard coughs behind the rooms. A nightjar flies soundlessly around my head then lands momentarily on the road before chirping like a cricket only three times, because on the fourth the genet will nab him.

Out of the unknown hiding places of the vast East African wilderness millions of critters creep through the dead of darkness to prepare for the day. Some don’t make it, most do. It’s a terrifying time. A hot night feels cold. A completely still sky shimmers with fear making the stars and galaxies not just twinkle but explode.

I went outside my room in the middle of the night in Sabi Sands. I couldn’t really hear anything but the din of the air-conditioners. Then I perked up my ears because something unusual was coming from the main lodge which should have been closed up.

Several men were in front of a big screen TV watching the Ryder Cup.

The next day the leopards were in the same places. The dog come and go, but always the same way. The biggest of the kudu were always in the river edge by the tiny hippo pool.

Here the guides know where everything is at almost every minute of every day and night. The first thing the guides ask newly arriving clients is, “What would you like to see?”

In the wilds of East Africa that’s about the silliest question imaginable.