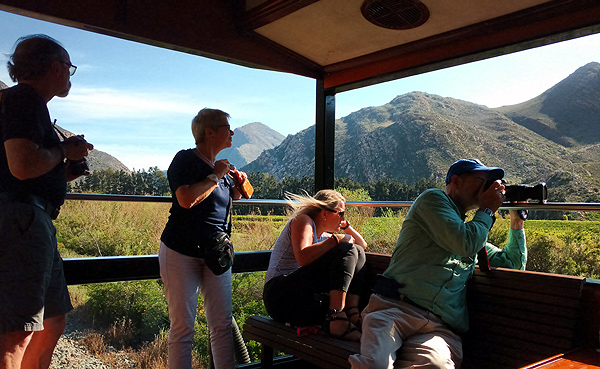 Is a luxury train trip a good addition to a South African experience? My current group and my previous group three weeks ago both took the three-day/two-night Rovos Rail trip from Cape Town to Pretoria, my 8th trip on Rovos and 10th luxury rail trip in South Africa.

So what do I think, now?

This current group enjoyed a seamless and remarkably ontime journey. (Rovos is usually late by a couple hours. We were only 35 minutes late.) We traveled from Cape Town to Pretoria in the late spring and throughout the first afternoon’s trip the wildflowers on the hills and across the farm fields were spectacular.

While the guide we were assigned for the “Big Hole” wasn’t the best I’ve ever had, he was very knowledgeable and pretty good. “Scottie,” the inevitable guide at the first afternoon’s stop at Matjiesfontein, was in full form for his “shortest tour of South Africa” where he blows the bugle, takes you on a 4-minute bus ride, shows you pictures of ghosts then herds you into a bar where he pounds out “On Wisconsin” out of a poorly tuned upright.

The food and wine were great as usual. The staff impeccably at your service.

Mr. Rohan Vos, after which the railway is named (Rovos), greeted us after the red carpet introduction in Cape Town with his provocative if racist speech about the hazards of not following train rules vis-a-vis the “declining of South Africa.” I – and virtually all of his staff – have long discounted those unfortunate first moments, but first time visitors may take offense.

At least half the passengers on all my recent journeys completely disregard Mr. Vos’ insistence we wear a “collar and shirt” to dinner and not bring cell phones or laptops out of our cabins. I think Mr. Vos has become a recognizable antique, often even to first timers, and therefore a reasonable addition to the theatrical experience of “traveling in a bygone era.”

Mandatory qualification: standalone reviews are dangerous recommendations for strangers reading them. People who know me and my predispositions and experience have a better chance of using my review well. Otherwise, it behooves you to collect many reviews from many sources.

Reviewing something like a luxury train in South Africa can differ radically by season and incidental circumstances like the weather. A contained experience like a train often is impacted by your fellow travelers and lot more than you might think. Nice folk as neighbors for 60 hours straight is going to make for a much better experience than otherwise.

I think I now have a lengthy and varied enough experience to write this.

The train isn’t very comfortable, despite how lavishly comfortable the furnishings of the individual cabins are. It’s much bumpier, louder and more jerky than its main competitor, the Blue Train. The Blue Train – which is as much a commercial train as a tourist train – does the same journey in a single night, rather than the two taken by Rovos Rail. The Blue Train has wifi; Rovos doesn’t. (Their prices, by the way, are nearly the same and they both include the identical two off-rail tours.)

In both cases the journey from Cape Town to Pretoria is preferred to the return journey. This is simply because the daylight hours attending each direction provide more spectacular scenery on the former rather than the latter journey. A “deluxe” compartment on Rovos is about 25% more expensive than a “Pullman” compartment, but practically mandatory if you want even a modicum of space between your bed and the wall.

In both cases staring out your window as much as you can as the train winds through the industrial Gauteng Province (near Joburg and Pretoria) is a valuable experience in itself. Provided you obtain a grasp of South Africa’s complex but fascinating history and its current struggle to move millions out of poverty in a relatively short time, you’ll get a good grasp of poverty on the move to something better.

South Africa’s very old and very reliable rail system does not include regulations on its passenger trains regarding the dumping of waste. Rovos and the Blue Train both achieve higher standards than all the other many passenger trains, but neither gets to half the standards of European trains, for example.

As a result, at some point in your journey and especially when standing in the open observation cars, you’ll smell this failing. It’s by no means pervasive, sometimes a single incident or two, and criticism must be directed to the entire South African system, not just your train or journey.

My group this time and the last loved their experiences and had enormous fun. But to a person on both trips that I questioned, it was not something anyone would choose to do, again.