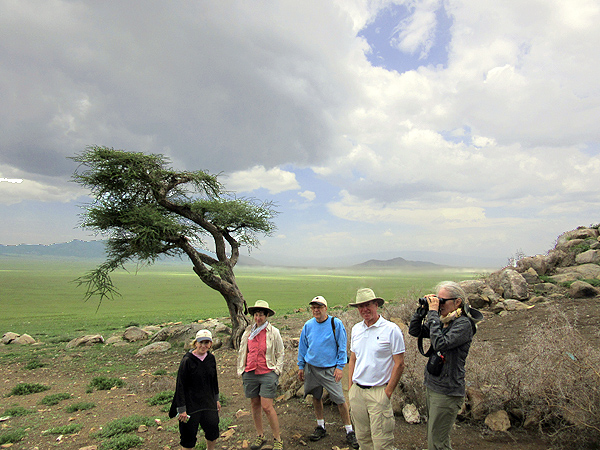 From mid-morning when we left Olduvai Gorge to when we rejoined the main road from Ngorongoro to Seronera, we were off-road in the middle of nowhere. I saw one distant group of Maasai with goats and not a single other car, not even a dust plume of a far distant vehicle or far away donkey convoy for 30 miles. It was us, the overwhelming Serengeti and 150,000 white-bearded gnu.

We lunched on a kopjes 1500′ above the vast newly green Lemuta Plains with new storms threatening above. We took more photos of one another I think than anyone took of the 30 lions we’d so far seen! Behind and below us was about 300 sq. miles of Serengeti dotted from horizon to horizon with wildebeest.
A fierce wind nearly tore out picnic table away, fluttering our shuka table cloth like tissue paper. We stood into the wind behind the table, holding down the coffee and milk, box lunches and tipping our heads into the blast. I knew it would only last a minute. It was the updraft for the coming monster storm, the soul of the Serengeti being sucked into the heavens. As it calmed the thunder grew, rumbles cascading down our high kopjes onto the plains below like bowling balls echoing down a lane.

We’d found the migration, and in fact that was how I encourage people to prepare for this somewhat intimidating day. “Do you know where you’re going?” someone finally always asks, or more in Mike Samars vermicular, “How the hell do you know where you are anyway Jimmy?!” But this is my favorite moment on safari, whether the wildebeest are here or not.

The vastness shelters a powerful humility. We’re from Montana, from the south side of Chicago, lawyers and building managers and meditation instructors and safari guide.

But barely holding our own against the building storms of the Serengeti, hopelessly loss on a massive granite boulder that could indeed be billions of years old a fraction of a mile above the plains, our differences indeed our persons, our definitions are so trivial as to be absolutely meaningless.

Then the wind stops completely. A northern wheatear floats onto the point of rock. For a moment the clouds seem to stop churning. We’re so far above the animals that they seem frozen below in time. The equatorial sun behind the storm clouds still powers the deep colors below, but suddenly it’s darker. The shadows have disappeared.

The silence must be like the peacefulness of outer space. It’s the calm before the storm.
Justin and Tumaini pack up so quickly my binoculars end up in the food box. The engines are humming beautifully and the car begins to move even before Neil’s completely in. The door slams and off we go … northeast over the plains, away from the storm.