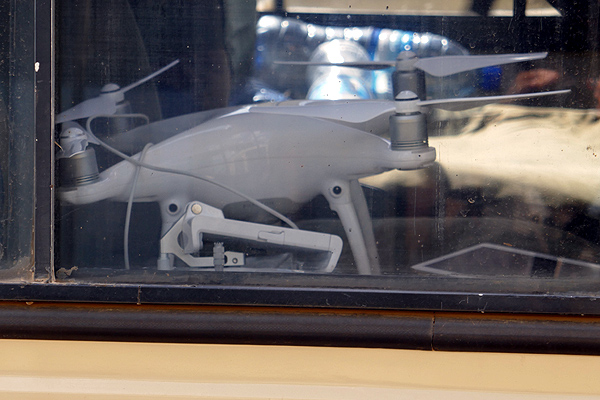 We’d found the migration, dozens of lion, hundreds if not thousands of elephant, and we were in the Seronera Valley towards the end of our safari watching a leopard hunting.

Normally leopard hunt at night, but there was no doubt as this magnificent rather stubby female stalked through the thick river’s edge foliage diagonally towards us. We couldn’t see what she was stalking, but her behavior was undeniable.

There were two other vehicles besides our own two, all of us dead silent at the road’s edge watching her. She was about 40 meters away in the thick stalks of olive reed grass that fill in the lower sides of the bends of the Seronera River. Her nearest tree – where leopard spend most of their time – was a scraggly but tall yellow-barked acacia another 40 yards behind her on the river bank.

Her whole body was lowered into the grass when she stalked. Once we’d picked her out from the movement of the grass we’d follow her ears and tail. Then, she’d stop and sit upright giving us a beautiful view as she sniffed the air.

As I was watching her in my binoculars I was trying to figure out first, why was she hunting during the day, and second, why the shyest of the cats didn’t mind us.

None of the vehicles were jockeying for position as often happens. If she fell out of view for a moment or two, none of the drivers became bullish and started the car with its clanky noise and inevitable gush of diesel smoke to move six inches for a better view. Did she accept our respect and suppress her annoyance?

She was sitting up, sniffing the air for the longest time and even though I didn’t need my binoculars to watch her now, I couldn’t set them down. Her face seemed to be undone by spots. Large black blotches spread unevenly from her whiskered nose onto her jaw. Quite unusally she had a black collar on her chest rather than spots. But she seemed healthy and angry like all hunting leopard, and the unsymmetrical coloring simply belied the inbreeding that’s happening among the leopards of the Seronera Valley.

Yet it was beautiful. She was of a new, modern generation. No longer constrained by the fear of day or the audience in the gallery, her chances of feeding were now greater than her ancestors.

I couldn’t lift my binoculars off this magnificent beast, even when she was completely still and closer than ever to our car. So my interest randomly moved above her in the lens image, towards the distant hillside on the other side of the river, bleached out by the noon day sun.

Lions run only to hunt, but this was a grand male and a female and they weren’t running down anything, they were running in circles, batting the air!

The male’s beautiful mane looked like it was trying to float off him backlit by the glaring sun as he twisted and turned angrily, jumping slightly but why? About the only time you see such a grand male and female alone together is when they’re mating. Mating pairs take themselves away from the pride for three days during the romance. They never move except to mate. Like newly weds most everywhere, they spend most of their time sleeping.

I tried to focus in on them despite their rapid erratic movements, leaving the leopard in her grass. Simultaneously with my image clearing in the binoculars, I heard whizzing. They were being harassed by a drone!

I couldn’t believe it. They were at least 300 meters from us. There was a road on the opposite side of the river, but there were no cars on it, and they were another 150 meters up the hillside beyond the road. There were no tracks anywhere near them.

The drone whined and whizzed and bopped up and down trying to gain a purchase about 15 feet above them. They ran wildly and divergently, setting the drone off balance as it tried to keep up with them. Each time the drone was foiled, it tipped erratically, sinking dangerously close to them before jerking upwards again.

Each time the drone got near him the male lion opened his massive jaws probably roaring and slapped the air near the drone once or twice. Then he sprinted further away hesitating briefly to look back over his shoulders only to find the thing still in pursuit.

I set my binoculars down and scanned the road on our side of the river. Besides the two other vehicles watching the leopard with us, there were no other people nearby. Then I noticed about a half mile away off a bend in the river hidden in the deep shade of several acacias a single old Landcruiser.

There didn’t seem to be anything near the cruiser, not a baboon or impala or anything. So why were they stopped? Certainly they saw us and knew there was something worth watching where we were. I focused my binocs on the car and watched the drone return out of the bright sunlight into their shade then descend silently through the opened top of their vehicle.

Tumaini and I were instantly furious. I decided (wrongly) that the leopard wasn’t hunting but was just being freaked out by the drone. So we started the car to pursue the drone-car ahead.

A reedbuck leaped out of the reeds like a bronze sculpture ejected from a machine, bounced once in the grass then ran away out of pursuit by the leopard that was now lost somewhere in the grass.

We raced up to the car before they had repackaged the drone. I shouted at them before Tumaini had pulled the car fully beside them. After determining that the six men in the vehicle spoke English I shouted again, “Do you realize this is a $5,000 fine?”

Meanwhile, Tumaini was scolding the driver in Swahili.

They immediately demurred. “We’re putting it away, now, we’re sorry.”

I couldn’t contain my anger. I explained how in addition to the fine, were we to report them the driver could lose his vehicle. T was saying as much to the driver in Swahili.

When drones first appeared on safari towards the end of 2013, the Tanzanian national parks promptly outlawed them. And rightly so. As I saw so clearly, there aren’t many things that can scare so completely a lion.

We drove away and within a few minutes they caught up with us and pleaded with us not to report them. They were Canadian workers at a gold mine near Lake Victoria.

We didn’t report them.

I was in full scale reverie driving back to camp. I thought about the much earlier days on safari when just the presence of our cars caused lions to flee. I remember the days when videos first became popular and people brought these large rectangular boxes that were loud and noisy and how they, too, frightened lions. I remembered how a film crew I was guiding refused to leave lionesses that were getting nervous, and how they jumped at us.

There are 18 11-passenger hot air balloons lifting above the Serengeti and Mara every dawn, now. When they first started in the 1990s there was incredible uproar from conservation groups. Animals were freaked beyond belief. There were reports of hippos killing each other when the balloons floated above them.

So am I just being too old fashioned, to think that a drone is any worse? Won’t the lions finally get used to them, just as they are to the camera flashes, loud talking, revving engines and the insidiously loud blast of the gas jet of a hot air balloon?

Both wonderful photos are by Mariam McCall, wildlife photographer and sleuth. 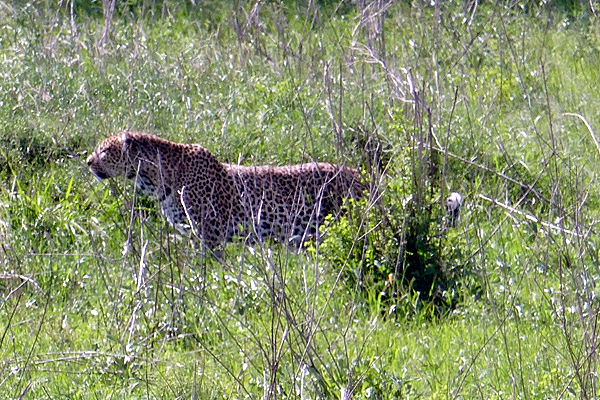