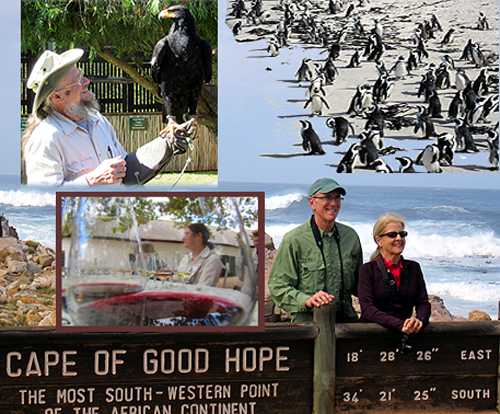 Our final days in The Cape included wonderful touring of the Cape of Good Hope and the wine country.

Although it was overcast for most of the day at The Cape, that doesn’t reduce too much the fantastic scenery. Starting at Cape Town’s popular Camp’s Bay, the group spread out wide getting pictures of this wide and beautiful white-sand beach.

Although I know that most Cape Townians think of Camp’s Bay as their principal swimming beach, I can also tell that the vast majority of people on it are foreigners and snowbirds from Europe. There are hundreds if not thousands of time-shares and luxury rental condos here, and tons of coffee shops and cafes.

This was a particularly vibrant weekend as it’s the week before Easter when many of the long-distance visitors first arrive.

We then began the spectacular Chapman’s Peak Drive. This cliff-hanging tourist route to the Cape of Good Hope passes over Hout Bay, and as usual, the black “shark” flag was waving, so the massive white-sand beach was mostly empty. The scenery here is breath-taking.

But there were remnants of last year’s fires, and while I’ve been coached by people that this is a normal cycle, I think it’s fair to say last year’s was extreme. It canceled the Cape Mountain Bike Marathon – the first time ever, and later we would here from some wineries how they were devastated.

But today it was drizzling! The drought is broken, although there is still a moisture deficit as El Nino slowly fades.

We rode the “Flying Dutchman” to the overlook of the two great oceans, and I recounted to everyone the “Age of Discovery” and fascinating history of the 1400-1500s culminating in Bartolemeu Dias’ rounding of these turbulent seas.

Everyone gazed into the vast ocean that continues to Antarctica, a distance nearly ten times that from where Antarctic ocean voyages leave Ushuaia in Argentina!

We then went to the penguins at Boulders and that’s always so much fun! They were out in full force, if you can say that of a dismal looking and slow-moving penguin! The place was packed, nearly shoulder to shoulder with tourists, but there were hundreds of penguins on display, completely oblivious to their admirers.

Today we visited Eagle Encounters, one of my favorite stops in The Cape. This remarkable raptor rehabilitation center has literally saved the endangered Cape Vulture. Our special private tour by falconer Donald is such fun!

Starting with the Jackal Buzzard, Donald flew Cape Vultures, a barn owl, a gymnogene, a rock kestrel and finally the not-native American vulture that was confiscated from a collector in Cape Town.

As he himself said, the birds all “love him” and that’s why he can show them off – how they fly, how they look and how obediently they stand on our heads!

We had two wine tastings, one at the Cape’s second oldest vineyard and a full cellar tour at the lovely Lanzerac where we’re staying. The group also had several hours in the lovely Afrikaans town of Stellenbosch, so they could visit restored homes from the 17th Century and enjoy some real Afrikaans food for lunch!

Tomorrow we finally get into the bush of Botswana. Stay tuned!