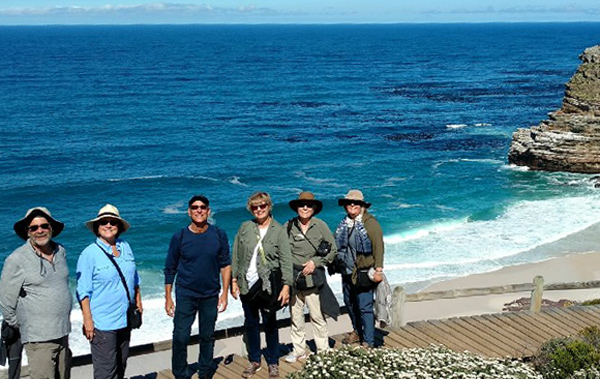 I got a real kick when Sam Epstein, one of our non-veteran travelers, got so excited seeing his first ostrich when we entered West Coast National Park! It’s so much fun to feel fellow travelers’ excitement on this trip, because these folks are so incredibly enthusiastic!

We finished the 5-day flower tour totally amazed at the friendliness and engagement of local South Africans traveling and hosting us. I’d actually missed anticipating this jewel of the trip, concentrating on the earth’s ridiculously explosive bouquet. But as wonderful as the flowers were, the South Africans stole the show!

The outstanding Sanparks guide, Eugene, who took us through the precious Hantam Reserve in the North Cape seemed incredibly low keyed, though never without providing the exact Latin name for any flower query.

And his soft voice grew even quieter when he asked if we’d like to follow him a bit down the farm road to view this teeny-weeny but intensely purple colored flower that indeed may have been one of the world’s most amazing organism, if only I’d had a magnifying glass to actually see it!

But that wasn’t the point! Eugene had for a number of years been studying how this ridiculously small flower was pollinated. It turns out that practically all the 2800 endemic flowers in the area have their own personal pollinator, often that pollinates nothing else!

Well this flower’s pollinator had to be strangely unique. The pollen was kept down its hair thin stalk which was a terrible 1″ long, or about ten times the width of the plant! A single weird fly did the trick, and no one would have thought a fly could do so.

But Eugene modestly divulged to us how he carefully and relentlessly watched this fly buzzing around this teeny-weeny flower until finally he captured the instant the fly landed and extended a proboscis more similar to a big butterfly’s.

Cheers went up from us!

And then there was Wilhelm Van Wyk, sixth generation sheep farmer on property known throughout South Africa as the greatest single area bloom on the continent. Wilhelm took us personally in his open Landrover as anxious to tell us about his American travels as to welcome us as only the third group of Americans to ever visit him!

Shawn and Debbie in Darling invited us into their home for a private dinner. They invited the owner of a large and prestigious winery, Groote Post, to join us and pair their courses with his wine! There are only 11 of us, but we’re being treated like the most precious of friends!

The owner of our lovely guest house in Darling, Oliver explained how his life in Switzerland morphed and brought him to Darling, an enthralling and romantic story, actually.

So yes, we saw an awful lot of fantastic flowers! But the bonus outdid the experience, and the people experience became the grandest memory.

Following the flowers we spent three days in and around Cape Town, hitting all the hot spots and sneaking in and out of the good weather. We got to the top of Table Mountain for several hours of sunshine, walked the length of the Company’s Garden and visited the National Gallery’s for its increasingly impressive collections.

We ate koeksisters and bobotsie, had braais and enjoyed a bright Sunday and thankfully at last warm afternoon in the Waterfront, where there are so many families and children and everyone seemed so incredibly happy!

On the Cape Point Day trip, most of us hiked the 2½ mile trail from the Cape of Good Hope to the Lighthouse under glorious sunlight! Then after our gourmet picnic, we saw the goofiness of the South African penguin and finally came to the wine country.

Two days here included a private tour of the famous Eagles Encounter raptor center. Susan Orloff of Chicago was so impressed that she adopted my favorite bird, the magnificent if scary martial eagle! Susan’s genoristy gave us all the special opportunity of watching the keeper, Alistar, handle this giant creature.

We’ve had so much good African wine and several private tastings and cellar tours. I sat next to Karen Higgins of Los Angeles at our Lanzerac estate tasting. She doesn’t like oak matured wines, but when they brought out the heavily oaked pinotage, so couldn’t help saying, ‘This is good.’ Pinotage was created in South Africa about 70 years ago.

It’s been an intensely wonderful South African trip, and now we head into the interior for a much anticipated mixture of diamonds and lions!