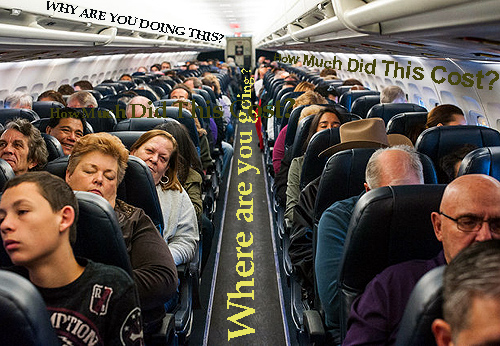 What’s the best way to start a vacation? Come early and “power down” or jump right in?

Absolutely ridiculous for the first two. Sensible for the third, but too conservative.

First of all, we’ve all had those horrible, disastrous flights and be real, they are not the norm. The norm is not good, but it’s a known quantity. If you choose the right flights and dedicate a bit more of your precious vacation budget to the flights and better seats, there’ll be no need to compensate for anticipated misery.

Consider a typical safari: In Tanzania the average daily rate today is $500 per day per person and my type of safaris are closer to $1000. So what’s the point in working so hard to save a few hundred dollars on your flights by making additional connections or taking inferior airlines or seats when it will cost you four times that to recover?

Wouldn’t it be better to have an easier journey and be able to start off right away with something unique and memorable, rather than paying for a hammock and wide-screen TV in a hotel that could just as easily be outside Newark?

I have numerous examples, but the best is Nairobi. I love Nairobi. Just as I love New York. I love the excitement, the snarling traffic, the putrefying smells, the stultifying noise, bumping into angry pedestrians, pissing off over-tired hotel clerks, biting into over-cooked fish! That’s the city! Because in between these negative memories is music, art, science and youth that is among the most engaging and inspiring in the world!

But … if you arrive Nairobi during the day on any day but Sunday it will likely take you 90 minutes through stop-and-go traffic to get to a downtown hotel. Now in about that same time you can board another airplane, fly over some of the most serene and dramatic scenery on earth, and be in your open-air villa on a plateau overlooking the endless Laikipia desert landscape, a horizon of warm breezes and immeasurable silence.

Soaking in your footed bathtub. Sipping a Tusker.

Here’s a less dramatic example. Where I am outside Arusha, Tanzania, is far less congested than Nairobi, and it’s about an hour from the airport in northern Tanzania where most travelers arrive.

Why not continue another hour or two (or take a flight of a half hour or less) to some idyllic spot like Gibb’s Farm or Chem Chem Lodge or Little Oliver’s Camp rather than dead-head it here?

To be sure where I am now, Rivertrees Country Inn, is one of the most pleasant of the Arusha area accommodations I know. That’s why I’m here. But it’s only with luck that the few monkeys in the trees will show themselves, the birdlife is modest by Tanzanian standards, and the lamb ragout while very good can’t compete with Fritz & Frites in Galena where I live.

Whereas nothing can compete with the absolute relaxation of a Gibb’s Farm massage, of sundowners at Chem Chem overlooking Lake Manyara or the symphony of early morning bird song floating in from Tarangire at Little Oliver’s.

“Factor in one day of recovery for every time zone shifted,” according to Travel Tips of USA Today.

Sounds reasonable. So the American’s average 11.1 days on safari will be spent thusly: the first nine days in a Ramada near the airport and the next two point one days on safari.

There are too many suggestions on the internet for dealing with time zone change. Mine? Sleep when you want to. When you wake, read. You won’t want to sleep when on safari, and it won’t kill you to be a little tired.

We’ve got stats for this: A quarter of all flights are late or canceled and this is as true for domestic as international flights. Using such free internet tools as flightstats.com you can survey your potential airlines for their level of reliability.

One in 8 flights results in a serious delay that will disrupt your journey.

So as I see it you can look at this in one of two ways:

First, obsessive American you are with wanting the most out of everything, come a day early: protect yourself.

I prefer the second: play the odds. If only one of your eight vacations is disrupted that means seven go without delay, and that means playing the odds got you a week more vacation for the same investment.

As a professional tour planner, I can assure we better designers save the best for last, anyway. A trip with sequential experiences begins with the least rewarding and ends with the most rewarding. It fits nicely – although is definitely not founded on – the possibility of a disrupted beginning.

I’m not doing a very good job selling this lovely estate where I’m staying, anxious myself to get into the bush. But them’s the facts, Jack:

If you arrive in the day in time to get going, get going!