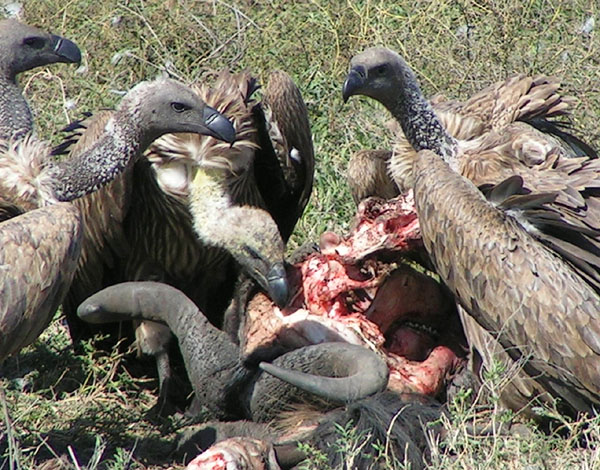 Shelly’s pride is one of the most famously studied groups of lions in the Serengeti, probably the most photographed by professionals and tourists alike, and without doubt the most tame.

There are 19 in the pride and when we saw them a grand male and female were (literally) hanging out on a thick, low horizontal sausage tree branch together, their majesty rather compromised by various appendages and supple parts of their engorged bellies dripping from the branch like pancakes on a grill.

Most of the fat ladies were on their sides clumped together under the shade of another sausage tree not far away. One collared female woke momentarily and dained to lift her head, An inhaling low groan of surprise that usually meets an acrobat on his way from one swinging bar to another arose from us assembled masses.

Appropriately flattered, she got up by push-upping her shoulders leaving her belly spread among her giant rear feet. She yawned once then rose her hinds to amble with difficulty to a muddy puddle nearby. She lapped up quite a lot of water as surprise turned to conversational delight by the dozens of tourists. Cameras clicked like conveyor belts as she sashayed another 5 feet (towards the tourists!) to a bush of shade where she flopped onto her side, eyes closed before her head (which was the only part of her anatomy that was somewhat empty) slapped onto the ground.

I was expecting applause.

This Lion Thanksgiving wasn’t made of grilled rabbit. It would take a full grown buffalo or multiple zebra at the least to inflate the bellies of these big beasts to the extent they were. At a feast like this lion can increase their body weight by a third.

But they weren’t hyperventilating, so it had been at least a full day since the kill. There were no vultures soaring or jackals prancing or hyaena drooling, so the mayhem was over.

But then as we left them I saw soaring out of the sky one lone white-backed vulture.

Completely unlike vultures – which never tame or habituate – the giant bird skidded to the ground literally to within 5 or 6 feet of a vehicle two vehicles in front of ours.

Skid is also unlike a vulture landing which is always one of the most beautiful aerodynamic feats in the wild kingdom. Different species land in slightly different ways. The giant lappet-faced, the largest, seems to float its 6-foot wing span onto the ground like a helicopter. The smaller hooded sneak into the fray like little drones with quick precision.

The more common Ruppels and white-backs like the one we were watching tend to make the most ostentatious appearance, spreading their wings wide (5 feet or so) before splaying their feathers to look grander just before touchdown, carefully lowering their mendacious-looking curved neck below their feet, which are hooked out like giant wicked witches’ clamps ready to snatch up anything in their way, before finally settling onto the ground.

At which point they strut about like anxious heavy-weighters in the ring before the blood begins to flow.

Not this lady. While her soar was pretty if unusually curved, she nearly slammed to the ground. Once she uprighted herself her head drooped until the long curved bill touched the ground. It stayed like that as if she were drinking. But there was no water there.

When we moved closer, she still didn’t move.

The other two cars ahead didn’t seem interested so moved right past her. I stopped our car just beside her. We saw a huge piece of carrion sinew stretched out of her neck onto the ground and several times she tried to swallow but couldn’t.

At first I thought she was choking, but as I watched her for just a few more minutes it was clear her infirmities weren’t accidental. Her “strut” practically tipped her to her side; she had trouble walking at all.

Life is not a serious of rapidly clicked digital images. The stories of life require patience and curiosity, an amalgam anathema to the Nikon D60. Reluctantly I had to forego my observations as my clients had filled their memory cards with enough vulture. But as we pulled away I began to understand someting plausible:

The old lady vulture had been sitting in a tree somewhere, and she knew she just wasn’t able to compete in the maelstrom of a dozen sometimes two of vultures dispersing the last of a kill. All her relatives were long gone with full gullets and probably lost feathers if not torn faces in the horrible fights that happen on the carrion.

She knew she couldn’t handle that. So she waited.

What she hadn’t anticipated were the dozens of tourists cars that would continuously line up to see the creators of the event, and who were now taking three long days to sleep it off.

So finally driven by near starvation in one desperate last act she glided down to the place she’d been watching for more than a day terrified at how close to the cars it was. She landed on some bits left about.

She tried, but she couldn’t get them down her gullet.

Too weak to fly away from those awful smelly machines, she started to walk to a nearby bush.

She was a magnificent old lady. Her feathers were unsoiled with the grime of blood and dirt exploded in the normal battles for carrion. Her faded brown feathers were dappled with the white of old age. She was pretty. Her heart was still trying to flutter with the fear of what she had done, but it was too old, so the hungry old dame ambled away as us old people do especially when embarrased with having been noticed.

The last glimpse I had was too distant. The lines of cars were moving steadily past her, uninterested, throwing balloons of dust onto her beautiful wings.