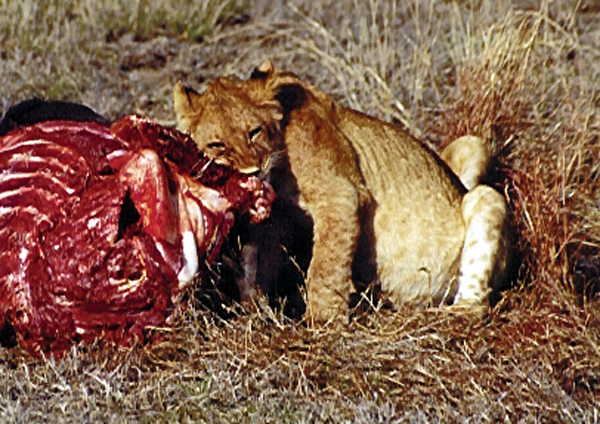 As usual for this time of year it was bone dry. Mornings were still and cold. Saturn twinkled above in the ink blue predawn sky almost as brightly as the half moon which had set in the middle of the night. The sun rose as a giant orange ball behind a charcoal grey curtain of dust and the first breezes tossled the fields of dead, blonde grass. By noon dust devils twisted across the veld. By afternoon strong winds obliterated the cloudless sky with layers of dust.

Pundits like to advise potential safari travelers that this is the best time to see cats. To a certain extent that’s true. But what they see isn’t often what they expect:

We traveled through the forest, its trees now all withered and dry, covered with dust. We watched with awe the great giraffe who moved through the near dead landscape with pleasure, finding every bit of green that was left on the thorny acacias. In between groves of trees they dared to spread their legs so that they could bend down to nibble the wild eggplant.

It’s a very dangerous thing for giraffe to bend down, which of course they have to do to drink. When they spread their legs, they lose the agility to defend a lion attack.

We moved to the edge of the great Kusini plains looking for cheetah, because among all this dry and still life live happily thousands and thousands of gazelle. These absolutely beautiful creatures need not drink once they stop suckling.

Then we saw under a bush a beautiful, magnificent male cheetah. His head twisted rapidly at us when we approached, his mouth unusually open. Cheetah are usually not spooked at all by tourists. I’ve often had them jump on my car to get a better view!

But this one popped out of the bush and started to run, only to practically somersault over himself when his right leg buckled. I put my binocs on him and noticed how swollen his right leg was. Cheetah kill by running down their prey then tripping them with the right paw before pouncing on the tumbling antelope.

With so much powder dust, racing across the veld is like trying to dance on a ballroom floor covered with talcum powder. His belly was empty. His killing leg was useless and his panting showed he was in pain.

We immediately turned around to let him be.

We moved over the last bit of the plains into the “Big Marsh.” It still contained quite a lot of water. The giant, deep green elephant grass was inedible to all animals, more like spears of cactus than grass. It covered the one end of the marsh and created a beautiful display of color in this otherwise drab landscape.

At the edge of the marsh there was still free standing water. I knew that there was a pride of lion living here so I scanned the area with my binocs even though I’d found no prints on the road. But there were particular problems now with tracking: The slightest breeze covers up any evidence with fine dust.

In one tiny drying up pool at the edge of the marsh I saw a dying hippo. He couldn’t eat the marsh grass and there was no grass on the veld to satisfy his normal needs of 100 pounds nightly!

But then as I was fixed on the hippo out slithered one of the most beautiful leopards I’d ever seen! I don’t know if she knew we were on the road above her, but she slinked into the open through the grass and started drinking voraciously.

Tumaini quickly turned the car so everyone could get a view. Heidi was able to get off a single shot before the leopard disappeared back into the elephant grass.

We left the marsh having not found lion or any evidence of them, and we were traveling off-road straight back to the lodge. There was much less dust thrown up by the car off-road than if we stayed on the overused tracks.

And so we bumped into our first pride of lion! One lonely mother and five little cubs. They were feasting on a buffalo. I knew she hadn’t killed it; it was days old and its gaping side fissures suggested it had died a natural death and been eaten by hyaena.

She’d probably come along a day or two after the hyaena had first found it and chased them off. Just in time, too. Her cubs were very weak. She was very weak and had a full belly but looked terribly forlorn.

Four of her five cubs had stuffed themselves silly, their bellies so big that they had trouble walking. The fifth, the rut, was still nibbling on the kill. Obviously of the same litter he was half the size of the others.

Lions give birth to 5-7 kits, but the lioness has only four tits. Usually all but four die very quickly. These cubs were about 20-25 days old. They wouldn’t normally be eating meat yet, although they can very easily. But Mom probably didn’t have enough milk. The rut was certain to die if he didn’t get this gourmet meal.

The next morning, our second game drive, we found one of the magnificent males of the marsh pride. His grand mane was dancing in the morning breeze as he sat on a little hill catching the morning sun. His face was still bloody from an earlier kill, but since he wasn’t hyperventilating it meant that his grotesquely enlarged belly had been stuffed more than 12 hours earlier.

The dried mud on this chin attested to his having gorged himself with water as lions must after feasting lest their GI system freeze.

He sat for us like the sphinx in front of the Egyptian kingdom. His face was heavily scarred for his relative youth, a sure sign that when he had been kicked out of the pride he didn’t know how to hunt and had many painful trials before mastering the art.

But his coat was magnificent, free of all disease, a wonderful sign he was well nourished. His shoulder muscles were almost the size of his thighs.

But most remarkable was that he was quite tiny compared to most male lions. His legs were shorter, his overall length perhaps as much as a quarter less. But he was a very muscular and his paws were as big as any male’s. I bet he could fend off lions twice his size.

Like the poor tyke we’d seen the night before, had been a rut. He’d probably almost died. But perhaps at the last instant his mother had found him a feast.

And he took it from there and now sat above the Lake Masek marsh ruling the Serengeti.