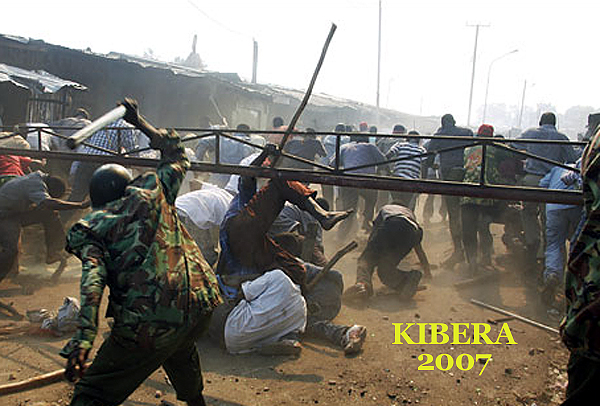 Riding cabs in Nairobi isn’t fun.  Traffic is unbelievable. You really get to know your cabbie.

Mine said he worked right through the last two elections. I didn’t believe him. I’d spoken to other cabbies, hotel workers, airport staffers – none plan on going to work August 8, the next election.  He caught my wry smile in his rear view mirror and shouted, “I will!” then told me why.

Kenya’s first democratic election in 2007 was truly too close to call. The voting had been exclusively along tribal lines, and that essentially divides the country in equal halves.

As the irreconcilable divide grew evident with the returns that trickled in over several days, voters grew angry. They grew angry mostly because their tribe didn’t prevail but also because there was no mechanism for reconciling such closeness. The “margin of error” is pretty large when it includes desert donkeys transporting boxes of ballots through torrential storms.

So people took things into their own hands, my cabbie explained.

Violence tore through the country. Kenya was a pretty developed African country at the time. People moved easily from one tribal area to another if they got a better job. They had inter-married and set up businesses. Now the most primitive instincts were erasing a generation of development.

Before it was all over several months later, thousands had died and nearly a half million had been displaced.

My cabbie said two days before the election in 2007 there was no food left in the markets or stores. One day before, the traffic lights stopped working and the police disappeared. On election day he remained at the airport all day long. Nobody seemed to be coming off any of the flights that came in.

He had little work for the next several days. Then as the violence began a group of three Germans approached his car.

“We are journalists. Take us to Kibera.”

He laughed. The radio was reporting wild protests in Kenya’s largest slum.

“We will pay you well,” they said.

He laughed some more and explained to them that his insurance would not cover any damage to his car if he drove them to Kibera. He accepted their offer of a thousand dollars for a trip that would normally have cost $10.

The journalists squeezed into his sedan with all their equipment but he didn’t start the engine until they handed him the cash.

Kibera is the closest slum to the Nairobi city center and also its largest. At the time there were probably a million people living toe-to-toe with no electricity, running water or sewage. Chapter 9 in my novel, Chasm Gorge, is about Kibera.

He had no traffic to worry about that day, but he had some trouble convincing the battalion of police that surrounded the last roundabout to let them through. He didn’t head for the main entrance to the slum, which is within view of Nairobi’s local Wilson airport. Instead he navigated some side streets then pulled behind an apartment building about a half mile away,, edging his car against the back bricks of the building.

Normally there would be people all over the place, walking back and forth to the slum, in and out of the apartment building, waiting for buses, hailing matatus, hawking sunglasses and baby dolls. Now, there was no one.

He didn’t even lock the car. He wasn’t sure he’d ever see it, again. He’d rather some one hijack it then abandon it when it ran out of the tiny bit of gas left in the tank rather than destroy it trying to open the side locks.

He escorted the journalists passed empty streets towards a collection of humanity that was growling and screaming. The rashing sounds of running feet on gravel and rocks hitting tin eclipsed the human ones as they approached a side entrance to the slums that required jumping over a small stream.

As they ascended the embankment, the stench of the slum merged with the shouting and shooting and screaming. At the top of the embankment they stopped in front of an abandoned little kiosk that maybe once sold bottle caps or old papers or slices of cardboard. Two bodies lay on the ground at their feet, headless. Other body parts were also missing.

“They ran away from me back to the car!” my cabbie laughed. The car was fine. They went immediately to a well-known hotel in the city. It was the best fare he’d ever made.

My wry smile was gone.