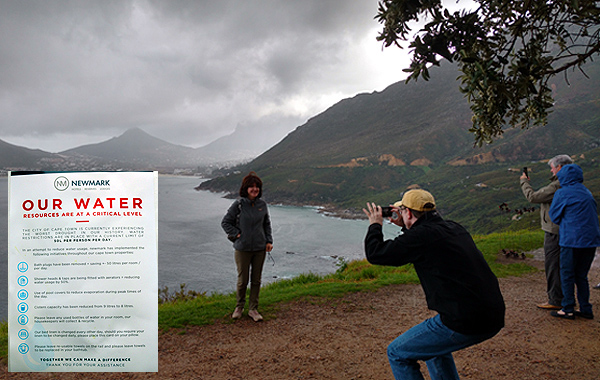 The water crisis in Cape Town is over … at least for now. Dam reservoir levels are at 62%, twice what they have been at this time for the last two years, and well above the average for the last decade.

Even so water use restriction remains in force and it’s both irksome (because of the current positive conditions) and understandable (because of climate change). It’s ironic that while being nearly rained out of several of our planned attractions, our hotel continues to forbid the use of the bathtub.

It’s been raining a lot in Cape Town, but by rearranging our planned activities on the spot, we managed to get everything in as planned.

We got to the top of Table Mountain when it was dry, had a brilliant sunshiny day at the Cape of Good Hope, saw the Boulders’ penguins before it poured on us at the last moment and managed to tour the Company’s Garden, though in a drizzle. Finally, our splendid special tour of Kirstenbosch was spectacular and dry.

But the neon billboards on the highway into the city from the airport say it all: “Keep Savin, Even tho it’s Rainin.” Admirable, of course, for while Cape Town right now is enjoying better than its historical average of precipitation we’re all familiar with the extremes of weather possible during this age of climate change.

But current restrictions being imposed visitors seems misguided to me. Saving 20 liters of water per guest at our Victoria & Alfred Hotel, today, does not in any way mitigate future hazards of a drought. Nor can any of that water being saved be used elsewhere. There’s more than enough for the present.

It brings to mind the hotel meme that emerged years ago as more and more of the public grew sensitive to conservation: those little pillow notes “reminding” you how much water can be saved if you don’t mind using your linen for more than a night, or don’t mind relinquishing the right to clean bath towels daily.

What that essentially came to mean was that the hotel could continue to charge you atrocious prices while they improved their bottom line through efficiency earned off your sympathies.

Don’t get me wrong. Conservation in all matters is noble. But playing on public perceptions in one area – water conservation – while madly lighting the halls and chandeliers with old filament bulbs or heating water with oil and other similiar wasteful practices is nothing short of hypocritical.

In our case Newmark’s Victoria & Alfred Hotel has removed the plug from the bathtub, which uses on average three times as much water as a shower. They’ve reduced the holding cisterns so that hot water often runs out.

Public bathrooms have grossly reduced or in some cases completely eliminated flowing water from the faucets, replaced with anti-bacterial gels.

The neon billboards on the highways aren’t for tourists, and I admire the city leaders for training their citizens in conservation practices that likely will be needed for the future.

But we visitors are here just for the here and now. Taking away our bathtubs so gloriously promoted on the web galleries or reducing a toilet experience to a chemical exchange is meaningful to us travelers only if what’s saved is crucial to someone else who would otherwise not get it, or that somehow will be kept reserved for that next non-rainy day. But that isn’t the case. Several of Cape Town’s dams have reached a level that’s too high and may soon have to be spilled.

One of the best long-range forecasters for African rain is America’s NOAA, and the ensemble predictions of seven well established models for the next six months shows The Cape completely normal, and the country as a whole receiving only slightly less precipitation than normal.

Still good reasons for Capetonians to develop better water conservation practices, but not for the Victoria & Alfred Hotel to pull the bathtub plugs from their visitors.

I might feel differently if my pillow note said, “Newmark Hotels is embarking on a noble program to enlist tourists in a long-range regimen to defend our earth against climate change.” Instead, the note is patent lie: “The city of Cape Tow is currently experiencing the worst drought in our history.”

There are all sorts of ways to skin-the-cat of profitability, but I don’t like it when someone appeals to my better nature simply to enrich themselves.