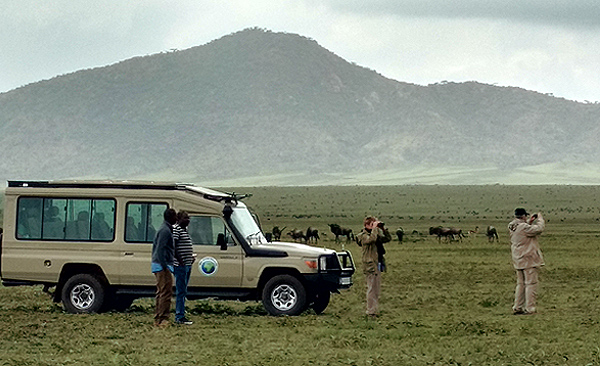 Equatorial weather is the most complex in the world: jetstreams tangle with each other from every direction. Weather forms but doesn’t move; the thunderstorm grows over you ominously and then dumps itself out of existence.

But climate change has turned the complex into chaos. We found the migration. Over two days we saw about 100,000 wilde and zebra; 400 eland; 10,000 gazelle and the count continues tomorrow as we head east from Ndutu onto the Lemuta Plains.

So far we’ve traveled through an enormous amount of the Serengeti: from the center to the near east to the far west and then south, even going into the Kerio Valley which is right next to Ngorongoro Crater.

We found the great herds dispersed in almost all those locations. The greatest concentration was around Kusini in the south, but the greatest number was spread over the recently rained-on plains from Ndutu south to the Kerio Valley.

It was so sad to see those wilde that had run so far north into the Maasai Kopjes. The babies that had run with those herds were almost dead. When normally they need 3-4 months to beef up on the southern grassland’s nutrient fodder, these little toddlers were running after a few days old.

But the babies on the southern grasslands which we saw today were fabulous! Acting like all little kids they ran madly around chasing one another, then being chased back, hopping in the air, skidding over slippery mud.

But the reason the herds are so fractured is because the rains have been. It’s wet on much of the southern plains and from what we hear in the crater, but dry as a bone in Manyara and Ndutu. This is crazy. It’s like tiny umbrellas have been opened over Manyara and Ndutu.

This may be because of the 4th cyclone ever to crash into the African coast. Hurricane Idai continues to cause amazing death and destruction south of here but may be zapping all the normal convection energies from us, royally screwing up the normal pattern of the rains.

So far the animals are handling it a lot better than we guides! But I have such an enthusiastic group the idea of a 10-hour day on the veld elicited only one response: Give us 11!

So that’s why we found so much, and not just the herds. Multiple leopard, lots of lion, cheetah and even two wild cats and two serval cats! One car glimpsed honey badger. We watched the rare white-headed vulture and giant Nubian vulture chase a jackal off a kill! We saw hyaena running into the sunset with tails and hooves.

We stared awe-struck at two nearly 20-foot long crocs and at a pool of nearly 50 hippo! And I was unsuccessful clearing out some sacred Maasai cave paintings so I could explain them to my group when I was challenged by a mother lion with cubs!

So so far it’s been a very successful safari. The animals are abundant, robust and healthy. But we’ve had to work for it, traveling twice the distances we would normally do if the rains had been normal.

How long it may be before such weather chaos damages the ecosystem I can’t say. But for now if you’re willing to work for it, it’s as good as ever!