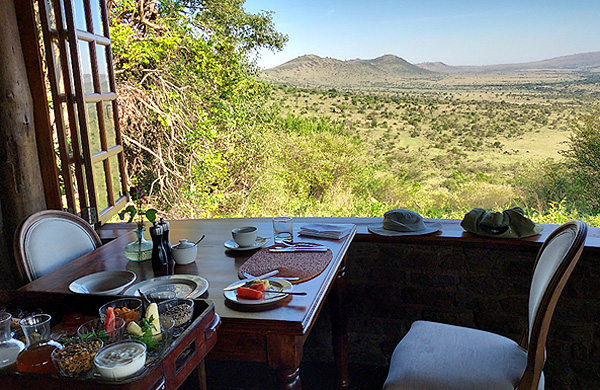 Those damned kids! They ruined dinner once again!

Mama looked at us unabashedly. It was really getting dark, around 7:15 p.m. in the Klein’s Valley that borders Kenya’s Mara to the north and the Serengeti to the west. The sun had blinked out at 6:30p and twilight doesn’t really exist in the equator, but the high stringy cumulus making the moon and Venus blur threw what light the far away sun touched them with back down to the ground. A sort of unexpected twilight.

This was a blessing for Mama cheetah who had been hunting all day, her two teenage boys in tow. We were with them for a long time, and it’s not an easy place for cheetah. The beautiful woodlands of the magnificent Kuria Hills that roll and tumble into the Grumeti River, not a lot of flatland for the cheetah to reach its inescapable speeds up here.

So we found them first when we were actually watching a newborn impala at an enormous distance. It must have been at least a half mile away. We were in the valley on the east side of the river and the impala were on the opposite hillside. Without your binoculars the mother impala looked like a colored leaf.

Nevertheless something was amiss. Mother impalas don’t bring newborns into the open. They were standing in front of a large rock at the edge of a heavily wooded area where she had obviously given birth. And most importantly, she wasn’t looking at us. At something else.

Even at that distance she had to know we where there. The sound of a Landcruiser was to her like the high streaking Dreamliners flying out of Nairobi were to us. No immediate threat, far too far away, but you still look. She wasn’t. She was staring at a real threat, three cheetahs slinking through the high grass and around the bushes moving slowly up the hill towards her.

So long as she could see them, she’d feel safe. She’d know exactly when and in what direction she should suddenly leap into the forest behind her. It was when she lost sight of them that she got nervous and stamped her foot. That was the cheetah’s advantage on the hillside: Not its speed but its stealth, the skill intrinsic to every cat.

We were able to see more of the hunting trio than the impala could. Mama was in the lead, her belly scraping the ground. The two kids spread out on either side of her doing the same. They were almost a year old, now. They’d better learn the ropes soon as mama would be kicking them out, soon.

Then crashing down onto the rumbling river, echoing off the crinkled mangled hide of the giant croc on the other bank and over to us we heard her alarm snort and an instant later she bounded away. It was amazing to see the newborn leap nearly as high as she did. I immediately saw the one boy on the right running now futilely at them, stopping at the forest edge and looking back sheepishly waiting for mama’s rebuke.

He hadn’t the experience yet to know he couldn’t use his speed. He got close enough were they on the plains. But as he stretched out his body into nearly the shape of a pencil his uncontrollable trajectory hit a termite mound, then he bounced and slipped down the slope of the valley. It wasn’t entirely his fault. He was doing what he was born to do. This just wasn’t the place to do it in.

Where we were would have been much better. The floor of the valley was sometimes a mile wide, a gorgeous bushland with lots of open grass plains. We’d already seen topi, hartebeest, buffalo, even oribi and reedbuck and lots of the cheetah’s two favorite dinners, Grant’s and Thompson’s gazelle. This is the Mara/Northern Serengeti for goodness sakes! The veld seems always green with rain, the trees fruit forever, hundreds of sunbirds and parrots and secretary birds and martial eagles had just been joined by barn swallows and white storks and Steppe Eagle migrants from the North’s imposing winter! There is no place on earth as pristine and diverse with big animals as right here right now!

Problem was the lions.

A few days ago five brother lions who were born in this valley but had left the pride came back. The pridemaster was killed. The brothers started to fight among themselves and the roars and grunts at night were incredible.

We watched one brother who had found a nubile young female to mate with, so we figured he had certainly become Macho Uno. But the others were still hanging around, and ultimately two or three might agree to split the spoils. Meanwhile, the torn fur and blood spilled all over the place. Anything in their way was doomed. And in peaceful times “their way” allowed for tertiary territories of cheetah and leopard. Not now. At least not until the war was over.

Mama cheetah knew she had to leave the valley where she’d raised the boys. They’d messed up plenty of her hunts, that was normal, but you can’t teach skills from your intrinsic behavior on a mountainside.

We left them with our spotter sweeping a 1500w tunnel of light over a now darkened forest. Finally found an open area not far from the river and toasted the sliver moon and Venus with our gin and tonics. The lions roared and whined in the distance.