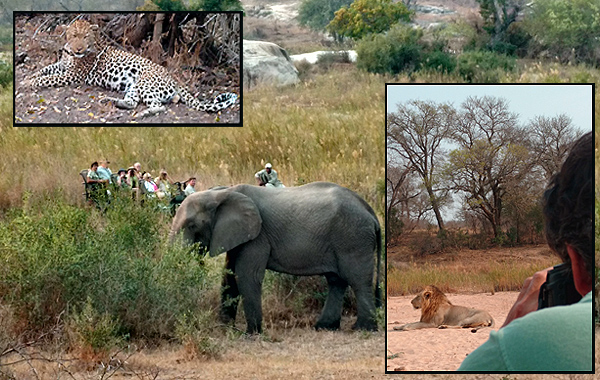 I remember when I was a young guide in Kenya, in particular about forty years ago when showing Purdue alums the Maasai Mara. After the first game drive I took the driver aside and yelled at him because he hadn’t found us a rhino.

We’d seen two prides of lions, one with cubs, about 100 ele, maybe thousands of various kinds of antelope, and a cheetah… all in about 4 hours. But no rhino. I remember those days shamefully now, but as I once was myself, so are the majority of first-timers on safari today.

Ticking off the highlights of anticipated experiences goes far beyond a safari. When I lived in Paris I often watched tourists racing from the Mona Lisa to St. John to Bacchus as they ticked off the de Vinci treasures.

Your Antarctic cruise isn’t half as good as your neighbors if you only chalk up 4 of the 7 penguin species.

I remember sitting on a plane next to a couple who were visiting Denali just as I had, and it was their 48th national park. They hoped to complete the 58 in another year. I love Denali, especially the west side, and can’t imagine spending less than 3 days there on each visit. They spent 4 hours, hardly enough to get beyond the east side’s camping grounds.

I suppose there’s a sense of accomplishment and a sort of affirmation that great wonders actual exist outside the television screen. But I look back on my early years of guiding with serious regret, because so much time was ceded to getting a glimpse of something that little interest developed in truly understanding anything of its complex, glorious situation at the time.

This is our second of three days in South Africa’s Kirkman’s Kamp, a wonderful &Beyond property located in the Sabi Sands private reserve adjacent Kruger National Park. In about 5 hours of total game driving so far, we’ve seen the Big Five.

The guides know that’s what the clients want, and the customer always knows best.

I defer to my painful memories.

The great Kruger area, including the many private reserves that surround the national park, has been in an extended 10-year period of drought, that was extremely severe in 2015-2016. In fact certain important areas of the park recorded the lowest rainfall in history and led to renewed calls to provide boreholes – artificial watering holes.

This is a critically important question. Should we “take care” of the wild animals – the wilderness as a whole – by intervening. If it doesn’t rain, should we dig a well?

South Africans tend to answer that question in the affirmative and East Africans in the negative. That probably reflects the organic natural health of each system and the fact that South Africa is so much more developed. In that regards it’s much more akin to America’s own national parks, where similar debates rage over the intervention to sustain wolf and bear populations.

The rain has been steadily diminishing in the great Kruger area for more than two decades. The last decade was particularly severe, but in 2017 it was only slightly below normal. This year, now, the rain has let up, again. July saw only one-fifth its normal precipitation, and June had only a trace of precipitation ending hopes that April’s increased amounts and May’s average amounts meant that the drought had broken.

Whatever the final outcome may be, it’s clear at this moment that the veld and the animals are deeply stressed by lack of food, derived of course from lack of rain. There were incredible stories to be told of the thin buffalo limping around, of the rhino with easily broken horns, of the dearth of antelope babies and languid behavior of the elephant. But this and more was something I was reluctant to convey to those in my group who were so ecstatic seeing all the great beasts for the first time.

Nor were the camp’s guides ready to convey anything but good news. How can I blame them remembering myself 40 years ago?

But the truth will out. Climate change is serious. Extreme weather reorganizes our biomass and redistributes the areas on the planet for Africa’s stellar game birds and animals.

But a bird can fly to its new home overnight. Hippo can move ten miles a night. But what do you do about 200 lodges and camps paying mortgages on their cement foundations?

We saw the Big Five in an area hardly 6-7 square miles large, because what survives concentrates among the last food and water sources, which are shrinking towards a center currently occupied by a lodge strategically built at the lowest level of a river’s track. Leopard and lion territories shrink. Elephant families consolidate.

This is all important news.

But the headline overwhelms it all: we saw the Big Five in a single game drive!