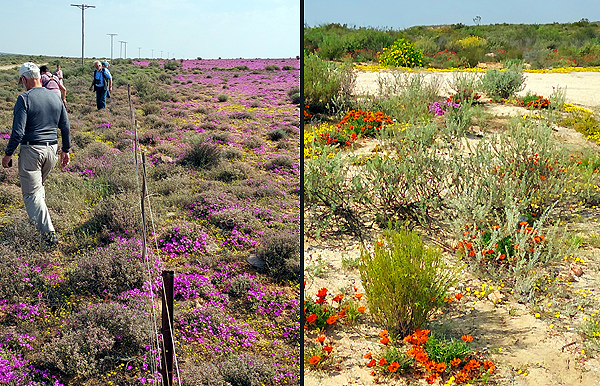 The numbers are astounding. How many large wild flowers did we see in five days? How many billions? How many different colors? I can’t begin to answer that, but they covered every shade imaginable.

Our “South African Flower Safari” ended with some really scary drives. South Africa is peppered with mountain passes and the majority of them are in the western and northern Cape, where we were traveling.

Sheer drops of a thousand feet were not uncommon. It reminded very much of our own Canyonlands National Park. But unlike our arid southwest the valleys of these canyons in the Cederberg Mountains were crammed with citrus orchards.

Oranges were being harvested. Never seen so many oranges. It was beautiful since the tree is also fully dressed with deep shiny greenery. Leafless peaches could be seen in the canyon like a gentle shawl of pink, for miles and miles, as they were just blooming. The white apple blossoms had only just started and the pears had yet to begin.

The bounty of South Africa has never appeared so obviously as on these mountain drives. And it was still cold! Spring has sprung, but winter is tenacious.

And as special as this was, equally special was the reception we got from the local population who was so thrilled that foreigners had come to see something that to them is one of their most precious treasures.

Many of our lunches and dinners were prepared just for us, by owners of wineries or experts in rooibos anxious to give us their best, not just showing off all they have to offer but thanking us for coming. That’s really cool. That’s something that used to happen all over the world and mostly doesn’t anymore.

It led to endless conversations about personal histories and current politics, climate change and Covid. Jacob van Wyk told us about the first seven brothers in his family who laid out the first farm boundaries in the late 1700s! He explained the unusual line of inheritance of the land, and why these Dutch/Afrikaans families find it so difficult to give up their land.

Steve Hebron was born in England and lived much of his youth in America before coming to the Northern Cape. His knowledge of American politics was stunning and his tender story of why he now feels tied forever to South Africa kept us all in rapt attention. He was equally curious as to why we are staying in a country with — in his words — “is threatened by Trumpism.”

I guess so much of the world has been seen and explored, the templates for sightseeing so routine and unchanged that the serendipity of personal, unscripted interaction has become rare.

Well it sure wasn’t on this trip. The surprise to everyone of the majesty and seemingly infinite coloring of the flower season together with the wonderful involvement of the locals and both sides aggressive curiosity of the other made this trip very unique, very very special.