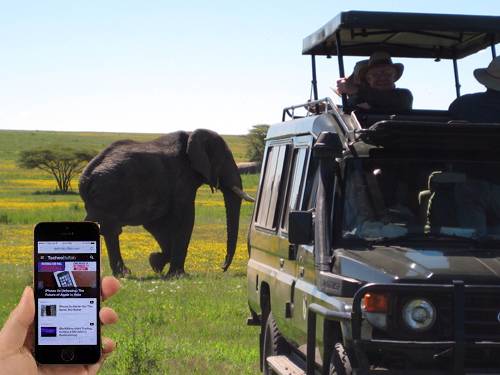 It’s been some years since the circuit has been so busy. Today my group is in the crater, but I won’t be able to write to you about it because the internet is jammed.

Bandwidth in Africa is fractional compared to the U.S. and hasn’t seemed to be a problem on the tourist circuit until this season. I’ve always been able to post at least every other day.

Cell towers are everywhere and virtually every property, even a tented camp, has satellite wifi. But now according to my manager friends, use especially by Americans and Europeans is so demanding that basic business conducted by the properties on the internet has been jeopardized.

You can hardly fault visitors: they’re doing nothing abnormal. It’s just that there are a dozen more satellites over America than over the entire continent of Africa.

So properties are taking steps to limit high usage. Several new IT companies in major African towns have developed at remarkable speed bandwidth filters that block use for a variety of possibilities.

Most, for example, now block Facebook, Twitter and Instagram. But the more sophisticated filters block usage by usage. In other words, if you’re trying to stream a video or upload a .raw image, you won’t be able to.

And so … am I. As soon as a tear opens in the cloud, you’ll hear from me! Stay tuned!