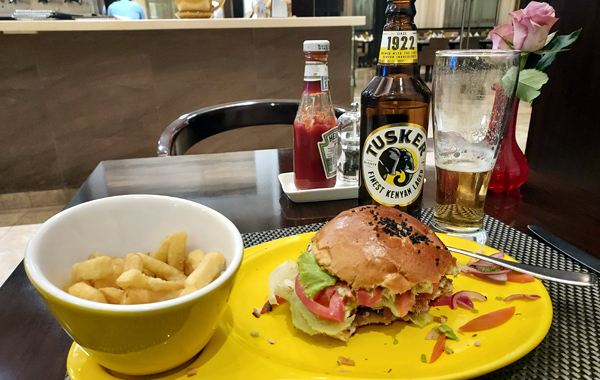 Can’t finish it. The burger is twice the size of anything at home, twice as juicy, twice as tasty and smothered with Kenyan tomatoes and onions and green peppers. Of course the Tusker makes a two-day old McDonald’s seem good…

And BTW, the fries are exceptional.

On my way home. Today I learned that the attack in Samburu that greeted us hardly four days out was a terrible fight between two rival cattle/camel gangs. There’s a drought in Kenya’s north, serious and extended. Cattle is the life blood of the peoples who live there.

It doesn’t justify the lawlessness but it explains it. And, by the way, it wouldn’t be possible were it not for the planet-load of arms sent to neighboring Somalia by America to stop al-Shabaab.

What goes around comes around.